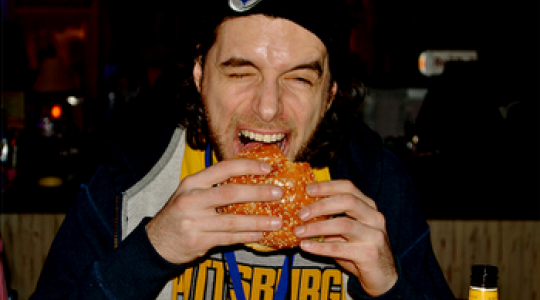 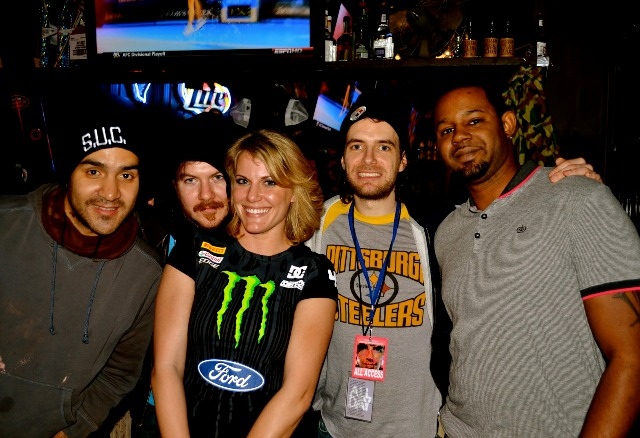 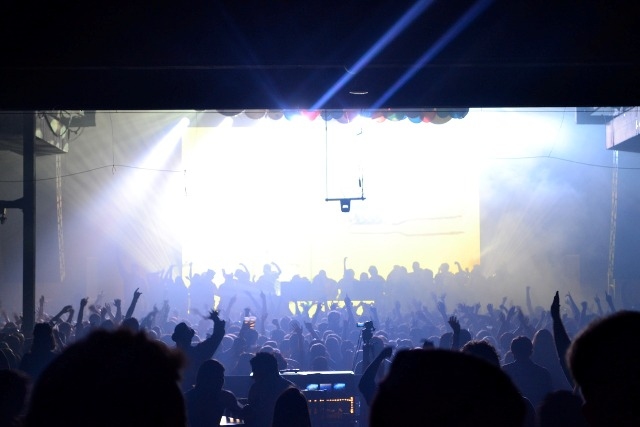 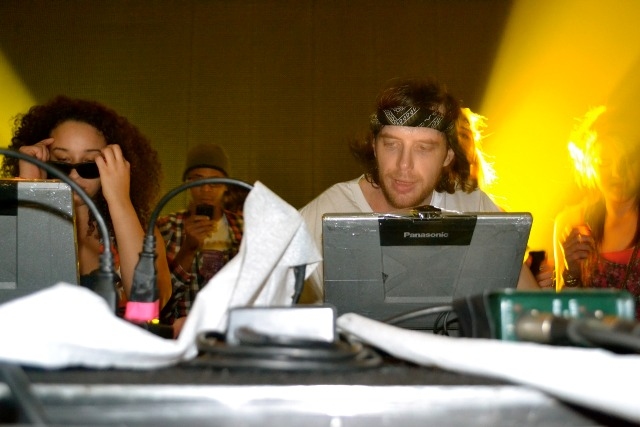 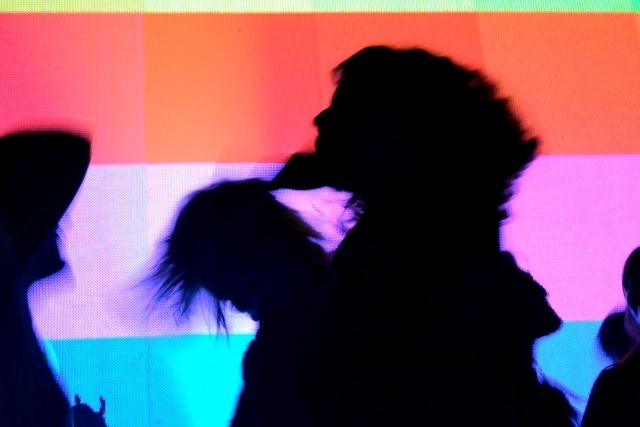 Gregg Gillis (a.k.a Girl Talk). His new album, "All Day", shut down the  internet for a day. After releasing one of the most highly-anticipated albums of the year, Gregg began his 2011 "All Day" tour by selling out every show throughout his January and February tour. After his sold-out performance at Dallas' Palladium Ballroom, we took he and the Girl Talk live crew out for some late-night food at one of our favorite burger spots, the Twisted Root Burger Company on SMU Blvd. across Central Expressway in Dallas.

Gregg, your art incorporates such a wide range of genres and generations of music. If you had to pick a favorite era of music, which would it be?

Gregg: Definitely, it would be '90s music. Comparing to other eras, the way I understand '80s music, it's something very different but something I barely remember. I love music from the '60s and '70s, but I never really grew up listening to it. But the '90s hit closer to home for me. When you're young and just getting into music, you're naive about everything. At that age, it's easier to be entirely dedicated to the music, not as skeptical as one would be as an adult. You're not so clinical about it. You just enjoy it and have fun with it. The '90s brings so many memories.  Regarding music appreciation, it was the best time of my life.

The Girl Talk concert experience is unlike many, i.e. the intricate lighting, stage props, balloons. Did your performance style evolve over time or did it have similar components when you first began?

Gregg: I think it evolved. This project has been going on for 10 or 11 years now and over half that time, around 6 years or so, people were never really enthusiastic about it. Relating the show and seeing that energy and pumped up environment now, that was never really there for many years. So it definitely evolved. There was a breaking point where people really started to get into it. Some shows could go well and some shows could be confrontational. You start playing in a room of 30 people, it could go either way. If more of my friends are there than other people, it could go well. But if none of my friends are there and we were in Tucson, Arizona back in 2003, people are probably going to hate it.  It's a very different vibe but the idea and performance are similar. For me, 2007 was the year everything broke. It's really been a fun project trying to adapt to bigger venues and bigger audiences.

Alright so this is an off the wall question : are you bringing back any Joysticks?

Gregg: Oh, wow! That a deep cut right there. I would say, at the end of the show tonight (like the noise jam thing) it was very Joysticks-esque for me. It's almost as though it's an element of The Joysticks now. I think some of that stuff could be really accessible if it is in the right context. After an hour and a half of dance music, to jam out to some abrasive noise, people can enjoy that. To me, I enjoy it. It's a good feeling to get that out. It's hard to gauge whether or not my fans like that part, but I really do.

Does playing harsh noise take a therapeutic and personal role or is it conducted more to see how it's received from the audience?

Gregg: It's a little bit of both. I mean, I like the Katy Perry pop songs but I also like harsh noise too. I think they share the same place that is cool. I'd like to see more of that.

Jaime (of the Girl Talk live crew): A band that is getting more popular that reminds me of that is Sleigh Bells. They're really good!

Gregg: I'm into weird music getting popular. Like Crystal Castles for instance, seeing them play at a festival and seeing her (Alice Glass) just scream and watch the audience react. I'm like, "I don't even care what this sounds like right now, it's just cool that she is commanding the crowd so well." But I still really do like their music. I really like that style. 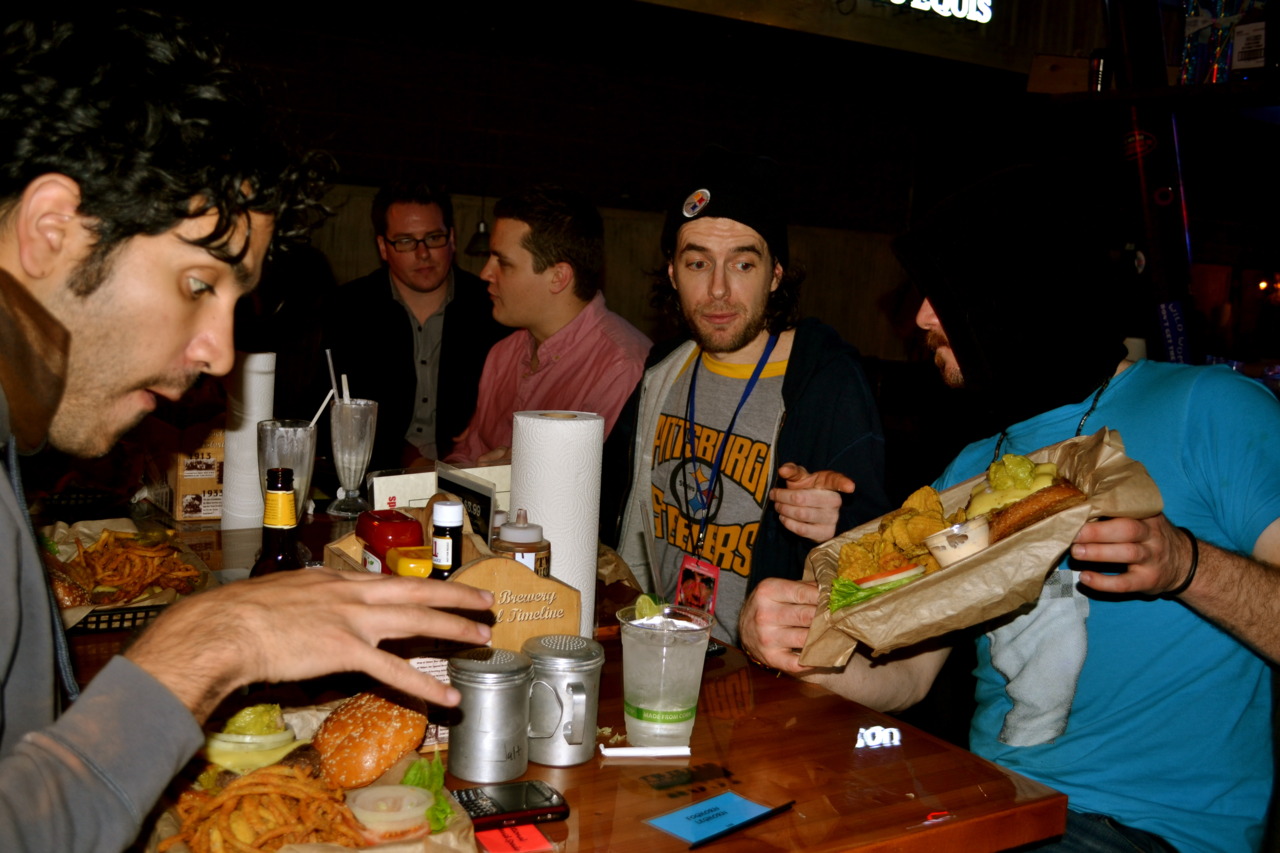 Girl Talk and his production crew before diving into the burgers

What was your first concert experience?

Gregg: The first show I saw was Hole. My dad took a friend and I to the show. It was such an eye-opening experience for me. Not too many people were into that type of music at my high school. They were more into rap or hip-hop. So it was really cool to just see something different and actually see something that I always wanted to see live...in the raw. Courtney dove into the audience and just took control. It was true rock & roll. It definitely helped shape my perspective. 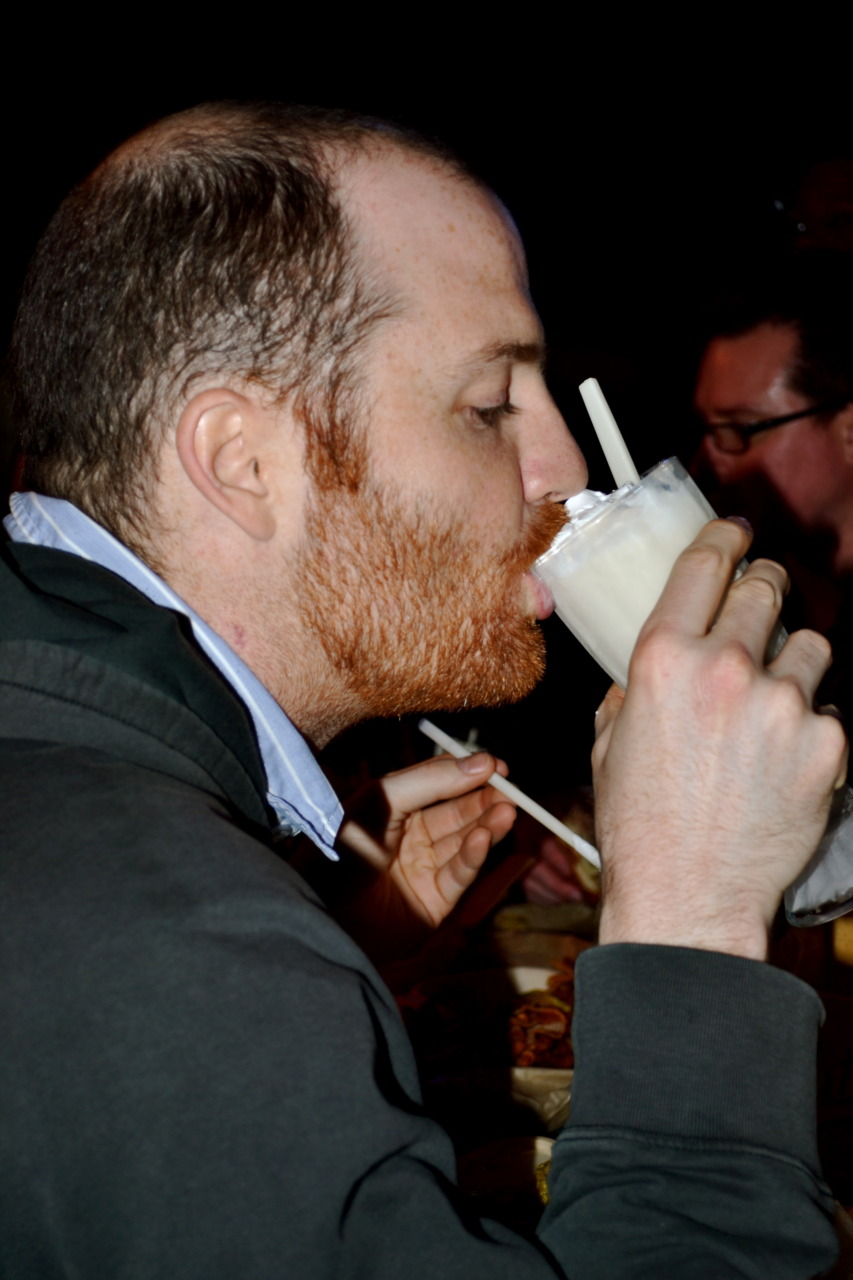 Your musical influence has bled into pop culture. How was it like to be a major contributor to Microsoft's "I'm A PC" advertising campaign? Did you enjoy creating the commercial?

Gregg: It was really weird because, to break it down in really basic terms, I did it because I thought it would be funny. I did it for my parents. It was cool but obviously weird seeing myself in that situation. There wasn't a major fan backlash but I did hear some people did say, "Oh man, he sold out." It's really a bummer that they thought that because it really wasn't about that. It wasn't about getting my name out or anything like that. I just thought it was different, hilarious and I wanted to see my ass on television. Ultimately it did happen and I'm pretty happywith it.

Respect. So here we sit, about to eat. Where's your favorite spot to eat back home in Pittsburgh?  Where should we go when we visit?

Gregg: In Pittsburgh, there's this place called Primanti Bros. The sandwich basically has french fries and cole slaw on it but the cole slaw is vinegar-based. If you're pretty sure you don't want the fries in the sandwich, then you probably shouldn't order from Primanti Bros. There's only one choice! Also, there's an option to have an egg placed on it as well. The signature sandwich for me is the capicola, cheese and egg. So good. But french fries on sandwiches aren't only found there. Many places have it around the city. It's a Pittsburgh thing. 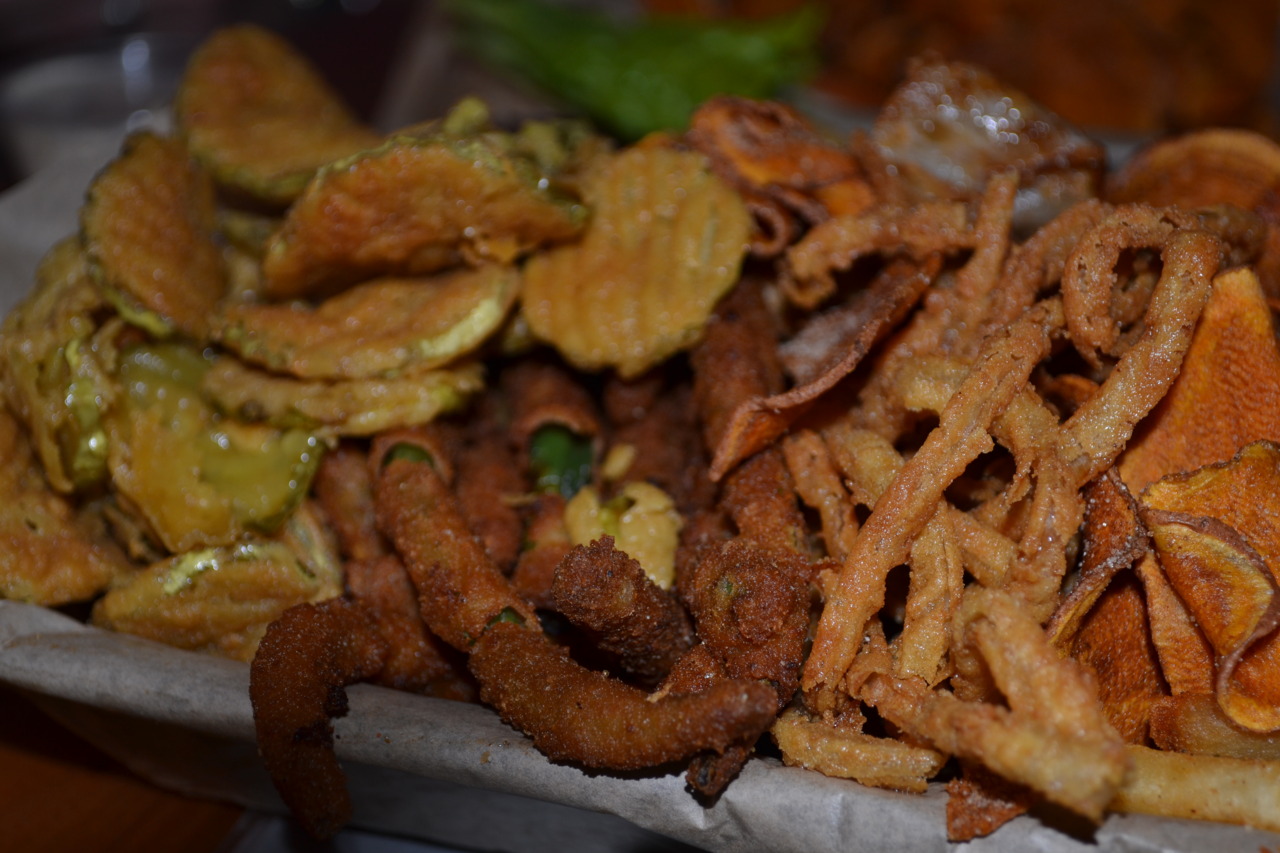 Outside of the embedded sandwich fries, does Pittsburgh have another signature food "thing"?

Gregg: Fries in sandwiches are the big thing. If you want to get something true to Pittsburgh, The Original Hot Dog Shop has a great dog. The big deal there are the french fries. It's like more than one person can eat! It's a tiny little baby of french fries.

What do you typically eat on tour? Any particular cities that stand out?

Gregg: As far as other cities are concerned, I love Skyline Chili in Cincinnati. It's really tasty!  Actually, I can't remember ever going through Cincinnati without stopping by for some Skyline. With most Cincinnatians, it's not such a big deal to them. It's not an event to go there like it would be at a place like Primanti's Restaurant in Pittsburgh. For instance, the Steelers won tonight so everybody will head over to Primanti's. I can't speak for most people in Cincinnati, but Skyline seems like an easy, cool, common everyday place.

Chris (of the Girl Talk live crew): We went to a pretty cool place in New Orleans called Acme Oyster House. They have these shots of vodka with an oyster. It was so good, so good! I think it was $1.35 per shot and oyster. Actually, it was a pretty good deal.

Gregg: I'm also a big fan of barbecue so when I come to Texas, I love hitting that up. I would say I like Southern food too just because you don't get that often until you come down South. I like the soul food. Also, I kinda like to eat big. I just kill so many calories on tour, eating heavy on the road tends to happen.  It's really hard to get exactly what you want to eat on the road. Most of the time, you find a rib joint or mediocre burger shack. That's what we end up doing about 90% of the time. When we travel, I feel like it's everybody's time to take a vacation from any diets -- to eat whatever we want! 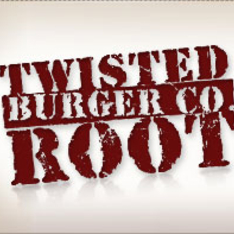 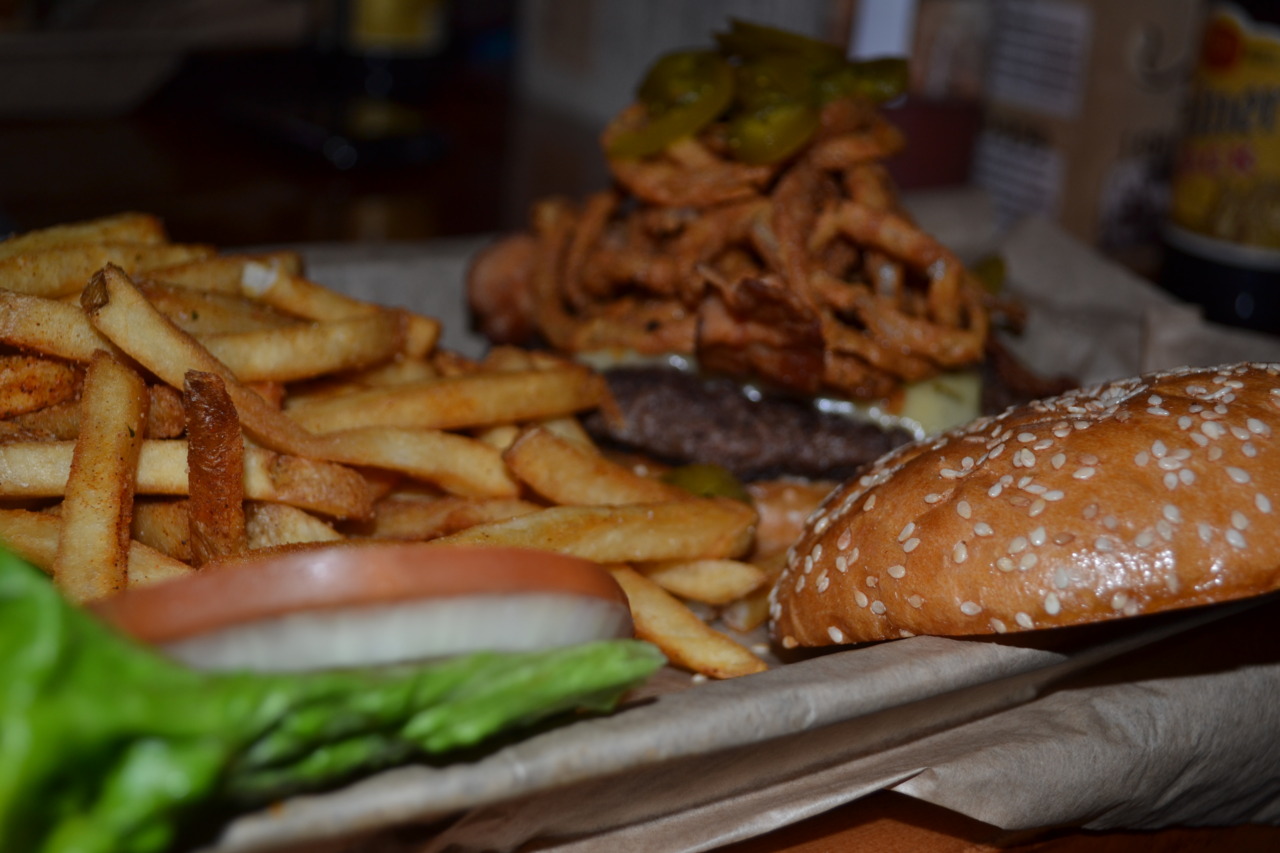 The Western Burger : Pepperjack Cheese, Bacon, Jalapeno Peppers, and Fried Onion Strings with fries for the side 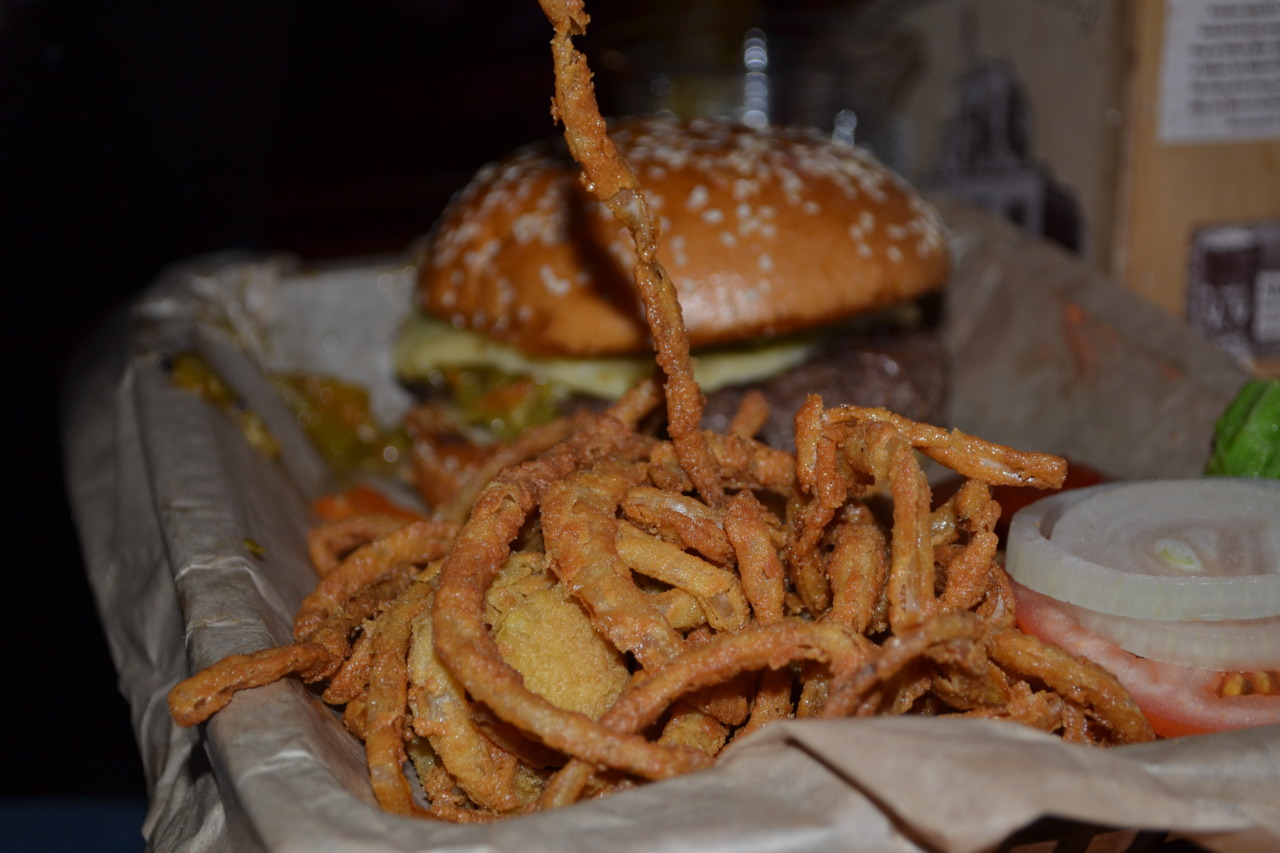 The other side of the table selected the Bison Burger with fresh bacon and swiss cheese, and the Green Chile, Guacamole & Pepperjack Burger with spicy pickled red onions and fried green beans.** We ordered the Amaretto-Oreo Milkshake (JP's selection) and the delicious, wintry Mint Chocolate & Bailey's Milkshake (Chris's selection) to supplement the dinner selections. 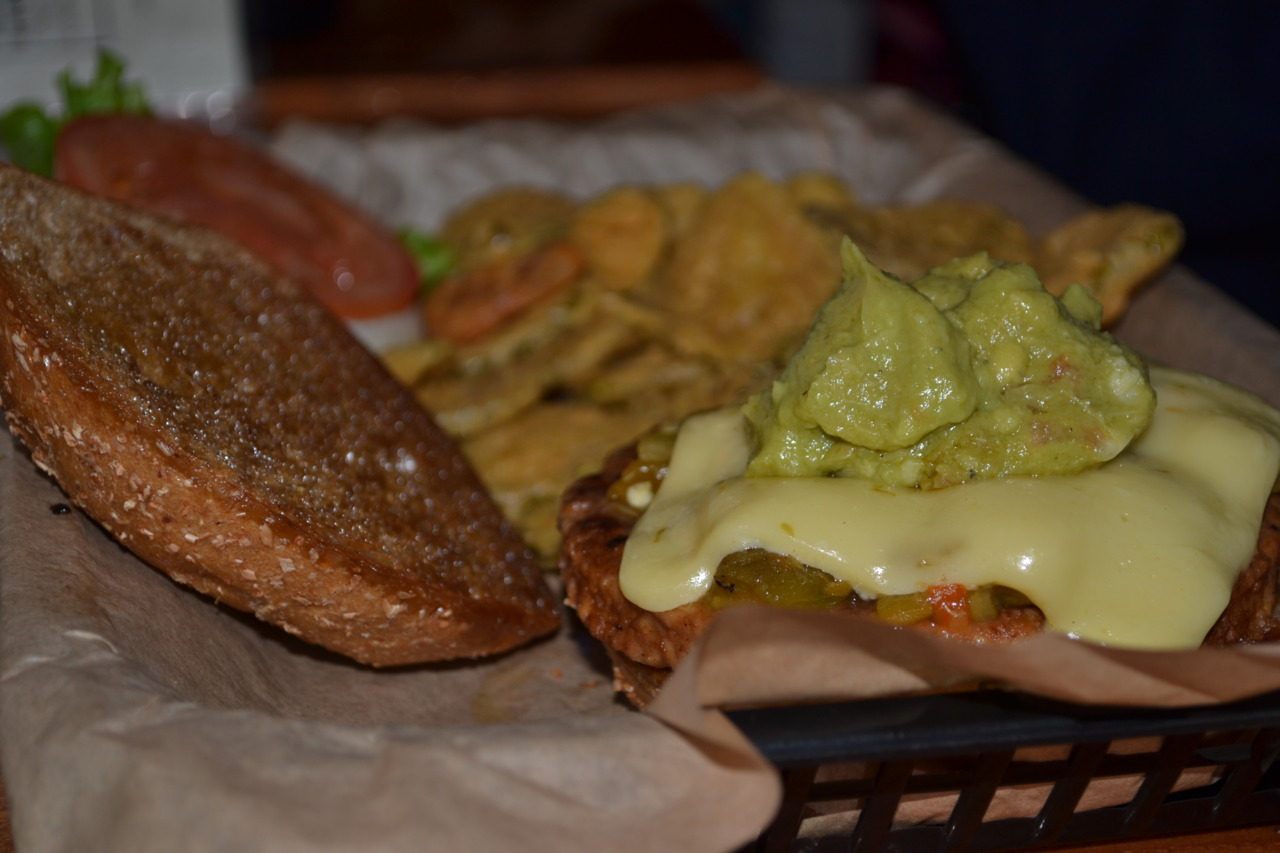 Photo of the Green Chili, Guacamole, & Pepperjack Burger with some fried sides.

What do you think about Twisted Root's burgers and sides?

Gregg: Man, the Swiss Burger is so good! It's a burger that seems like it's very in your face, almost made in a non-apologetic way, which tends to be right down my alley. I love  a burger that is really meat-heavy. Also, the Fried Ride spread is definitely where it's at. It's awesome! Personally, going to a place like Twisted Root is much better than going to a nicer spot with entrees that are less satisfying. This place is really good. 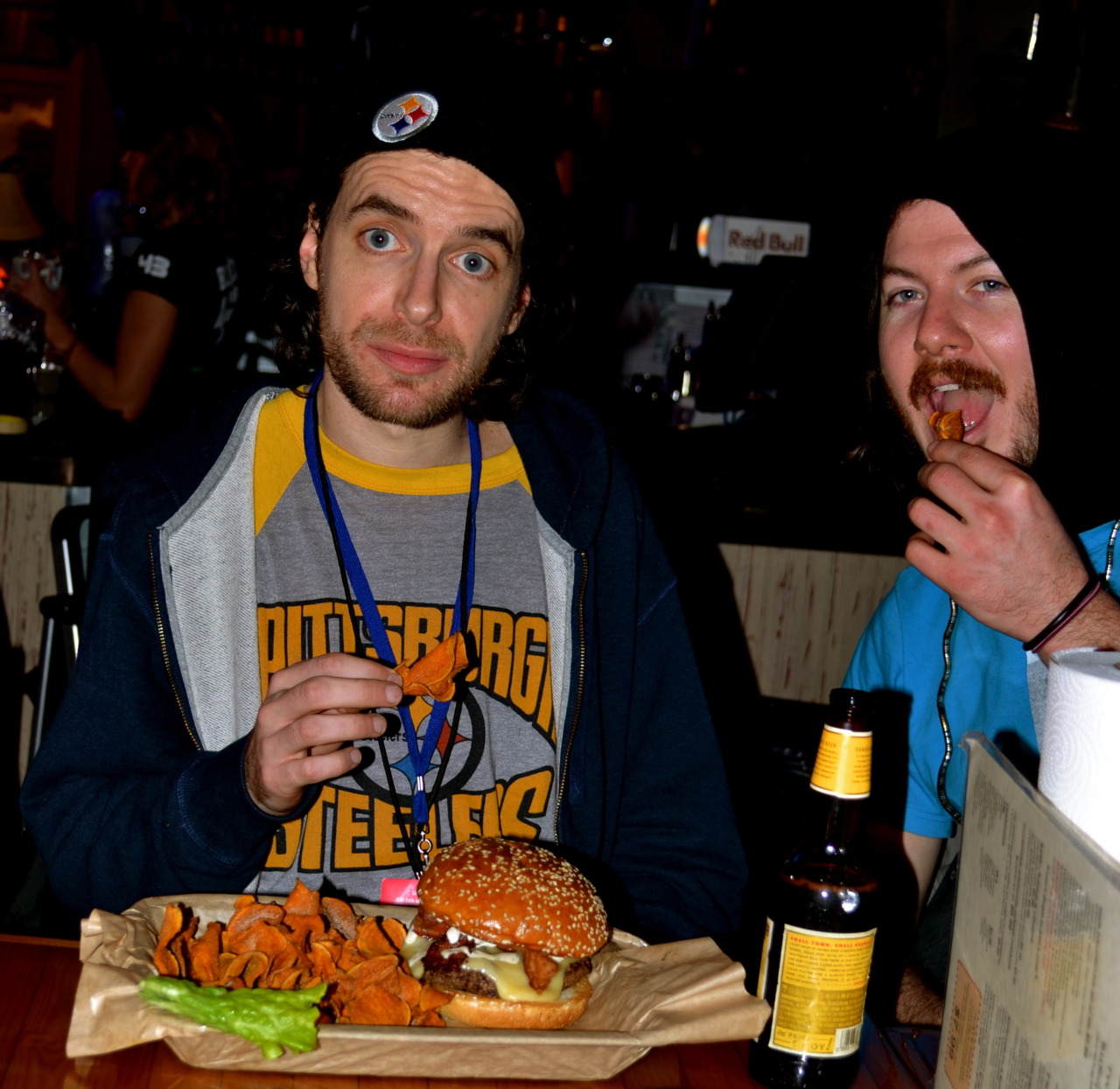 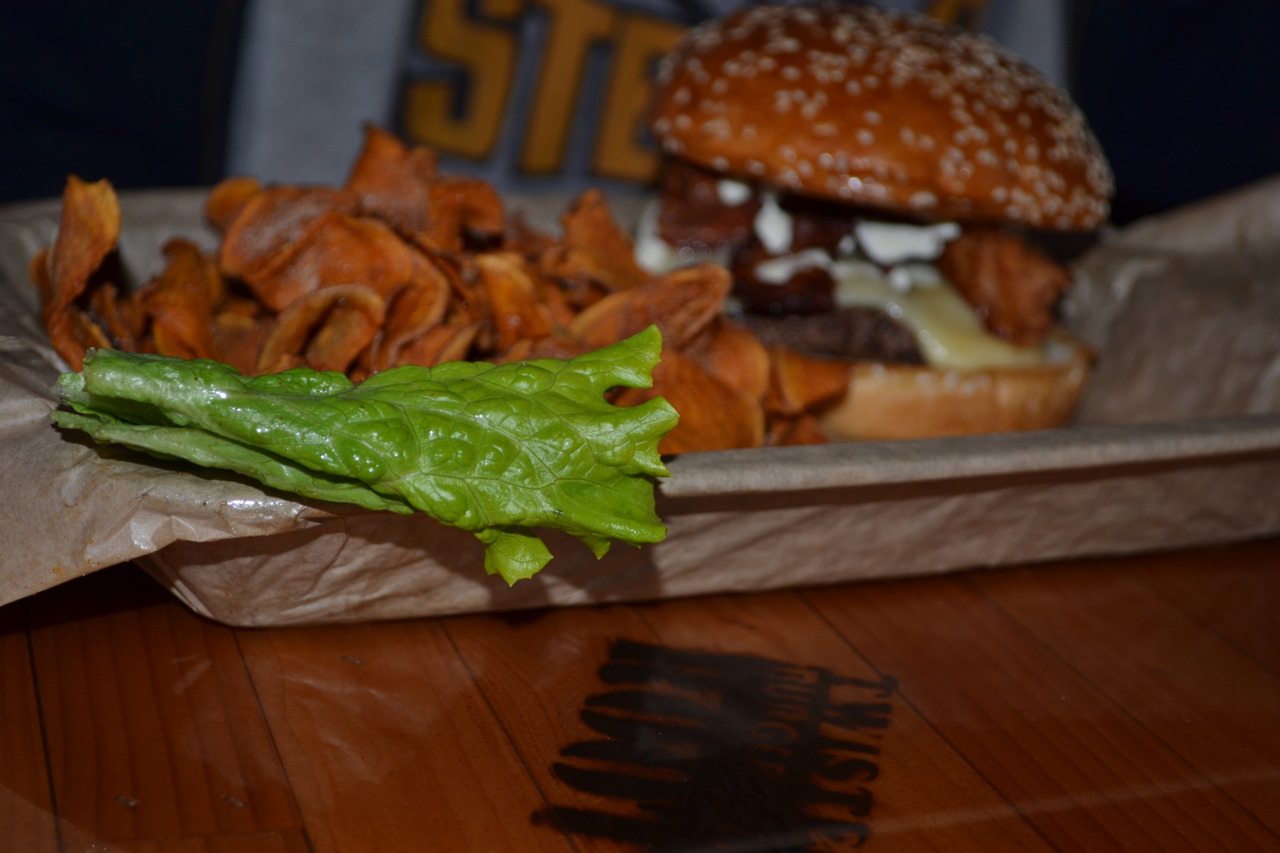 The food at Twisted Root was phenomenal. At the suggestion of our waiter, I (along with three other members of our party) dined on the Bison Burger with bacon and Swiss cheese. The healthier bison (roughly 30% leaner than ground beef) replicated the traditional consistency of a traditional beef hamburger, but delivered a juicier, more savory taste.

The Bison Burger allows diners watching their calories to indulge in the pleasure of eating a delicious burger without the guilt. Gregg's entourage took a particular interest in Twisted Root's pickle bar which offers patrons a medley of pickle varieties including, bread and butter, sweet and sour, traditional dill, and my personal favorite, atomic spicy dill.

As for drinks, the band was especially fond of Twisted Root's spiked milkshakes - the time-honored soda shop milkshake mixed with your  favorite liquors. The table favorite was undoubtedly the mint chocolate and Bailey's shake, the well-needed cap to a night of great music and mouth-watering burgers.

The Western Burger melted in the mouth. It's full of regional perk, incorporating much of what we love best about living in Texas: fried foods with a kick of spicy. The jalapenos were fresh and worked perfectly with the meat, but also appropriately countered the sweetness of the creamy milkshake and sweet potato fries. The Peppercorn Ranch dip played as a salty supplement to your "Fried Ride", but be careful not to over-saturate it with your green beans, it will take the taste away. To me, the whole meal practically tasted like a dessert. The Twisted Root concept is simple - bring customers fresh ingredients and make it taste damn good. 'Twas. 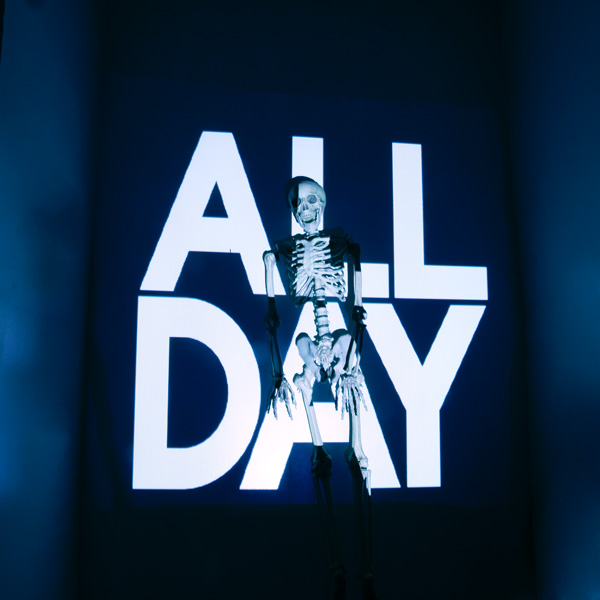