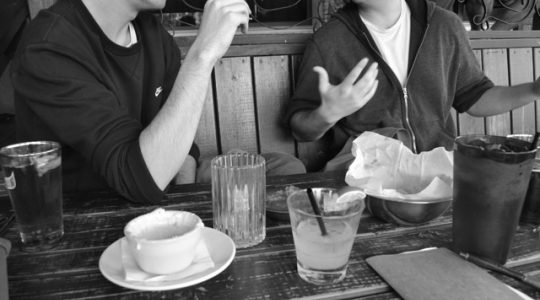 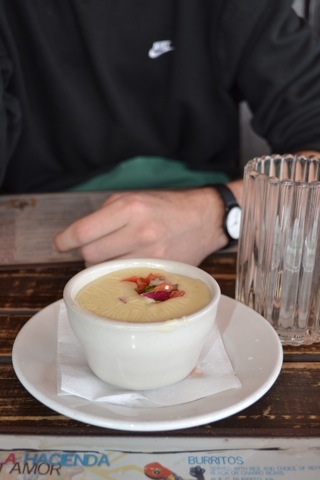 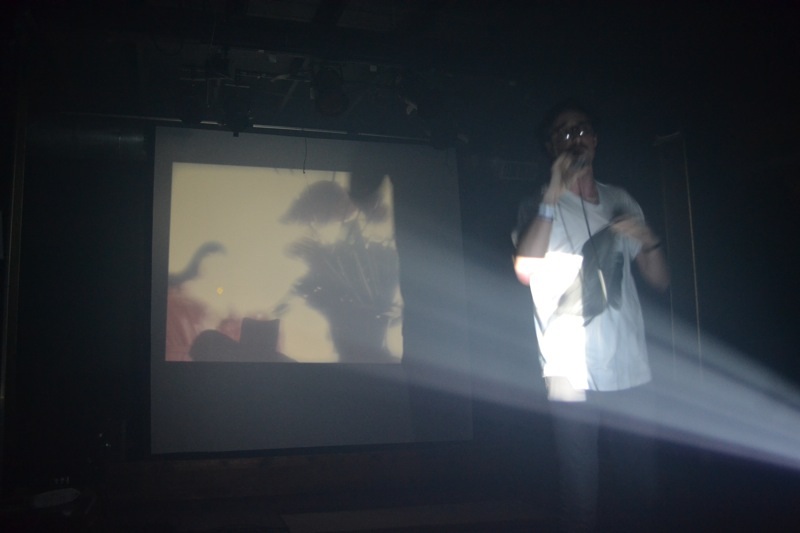 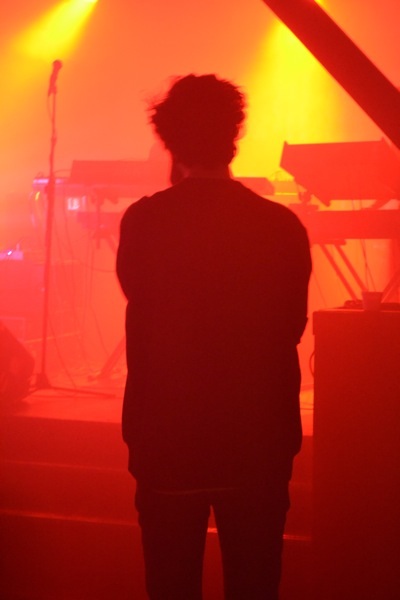 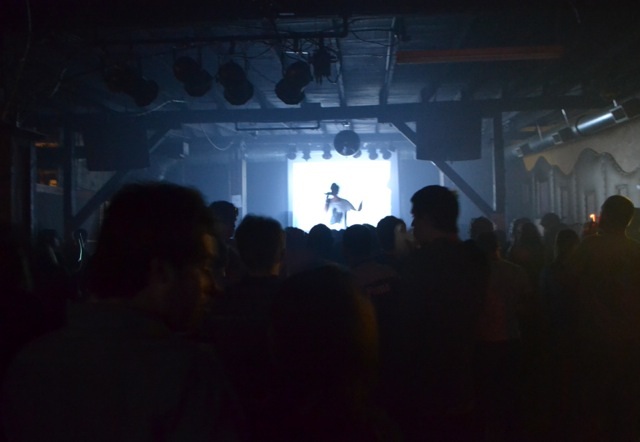 HOW TO DRESS WELL + HACIENDA ON HENDERSON.

There's no doubt about it. Tom Krell is a unique individual. He is How To Dress Well, an ethereal/R&B musical moniker that's dark, mysterious, but most of all, captivating. We wanted to sit down with him before he headed up to Denton for the 35 Conferette Festival. We chose to grab some drinks and dinner at Hacienda on Henderson, a classic E. Henderson Tex-Mex establishment.

How did it all begin?

I first started writing music when I was 15. I was really serious about it because I was really trying to get my life in order. Then, music got heavier, I went through high school and I joined a hard-corish metalish group then I went to college and music became much more when it was just me and then i was making different kinds of music and then I called it "How To Dress Well". 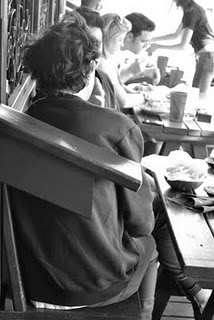 And now it's all happening so fast for you.

Yeah. Throughout the years, I became much more interested in making just pop music... like, make music that actually corresponds with my sensibility. I think before I wanted to sound like x or sound like y and I thought "I have to prove how badass I am". Now, it's more free. I really fucking love Britney Spears and I really love Grouper and I want to make music that incorporates that sensibility. Hopefully, I don't think I'm alone using that type of musical palate.

What's on your iPod?

I'm obsessed with a song called "World Domination" by Squadda B from his new mixtape I Smoke Because I Don't Care About Death. I love every song on the Diddy - Dirty Money album Last Train To Paris. I've been listening to some other crazy music which should give an indication of my mood lately. It's like the most miserable, depressing, beautiful thing. So fucking good. I really love Culinary Art School 2, the new OJ DA Juiceman mixtape. I've also been listening to a lot of Lubomyr Melnyk, who's an incredibily talented pianist. 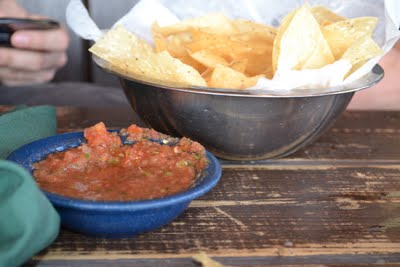 Starting Out With Some Chips and Salsa (pictured)

Wow, eclectic taste. Lubomyr... how do you spell that?

L-U-B-O-M-Y-R. Yeah, he creates these sound tapestries. The dude holds the record for the most piano notes in an hour, something like 93,000 keystrokes in an hour. At certain points within that hour, he's playing 19 notes a second. He maintains that for long stretches with these really romantic chord progressions. Basically, it's an insane mirage, drowning the listener in keynotes. Lubomyr plays live so if he misses a key, it can create this wave of dissonance for like four or five seconds. There's so many notes so the produced overtones are just crazy, just continuance walls of playing. The album is called Wave-lox, it's incredible!

Any cities with better vibes than others?

Every city is different and every day is different.  I mean, playing in Brooklyn, for example, is amazing because people there really embrace novelty and creative efforts. Sometimes when I play in certain places, I feel like certain people come with expectations, like they come with how a How To Dress Well show can rival their most recent favorite rock show but it's a very different kind performance. I find the best cities are just cities that are just open to what my performance can bring to them and what I'm doing that's singular, different and what it means to be alone and expose myself in that way. The most amazing thing is the positive spirit that I get from so many different people. The funny thing is they'll be a show where I think the show is going really mellow, real chill and then I'll look over and there will be a couple of guys and girls dancing like crazy.

I read a review from Portland. They gave you lots of love.

Definitely. In Portland, they were these kids that were just fucking loving it. It was a really emotional show for me. After the show, they wanted to talk and we sat there for half an hour just chatting. I was like,  "Oook, I have to go now on a plane." They were just super positive. I really dig when people bring there own positive spirit. Luckily, I haven't played in a place where people didn't fill me up with positive vibes.

It makes all those grueling hours in touring worth it.

It helps for sure. I mean ultimately you can't get too high off highs or get too lows on lows. I just have to keep doing what I'm doing and focus on my swag. 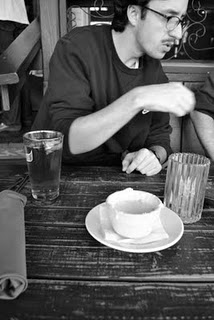 Hacienda on Henderson is some great Mexican around here. What are some good spots you've experienced on your travels?

Indeed. But yeah, I have a habit of eating Mexican food like 5 times a week. I love Mexican food, but I eat it way too much. Every single city has its spots. San Francisco has unbelievable tacos. Chicago has just fuckin' epic food. The best things in Chicago are their meats. Burgers.

Where do you go for burgers?

There's this place called Kuma's Corner which is a Chicago black metal and a hamburger restaurant. It's the most decadent experience ever. You go in and have to wait for like an hour, sometimes two. The burgers are all themed after metal bands. For example, the "Slayer" has jalapenos and habanero white wine reduction on it. The "Mastodon" burger has fucking bourbon poached pears. This past week, I just had the "Absu", a band I don't really know about but the burger was delicious. It had pepperjack cheese, avocado, tomatillo salsa, and little bits of fries and habanero all over the burger... on a pretzel roll. It's so good.

You used to live in New York. Any gems you come across there?

There's spots in New York I always miss like Grand Street Pho, just like cheap Vietnamese Pho in Chinatown. I just have all kinds of spots in New York I miss. I also lived in Germany and miss this place in Cologne, Germany called Habibi, an Iraqi food spot. The music they played was also fucking dope. 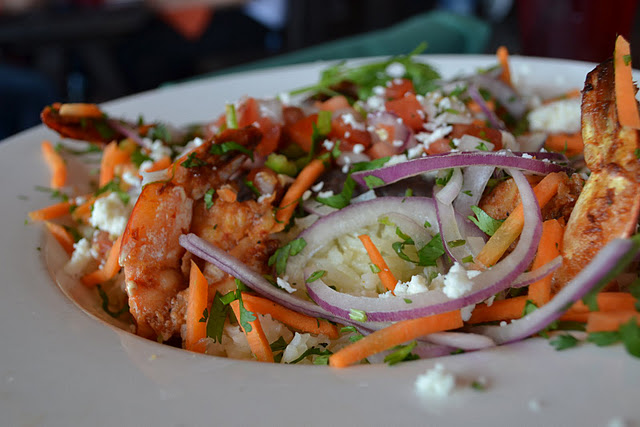 Picture of Camaron a la Diabla

I like to cook. I check out Smitten Kitchen a lot, which is a really excellent blog. I just recently made Pancetta & Balsamic Brussel Sprouts with homemade bread crumbs on top. Lately, I've been eating Shaved Brussel Sprouts Carbonara. Shaving brussel sprouts into thin strips and brown them in a pan and add bacon and throw some pasta in there and make a Brussel Carbonara. It's decadence. 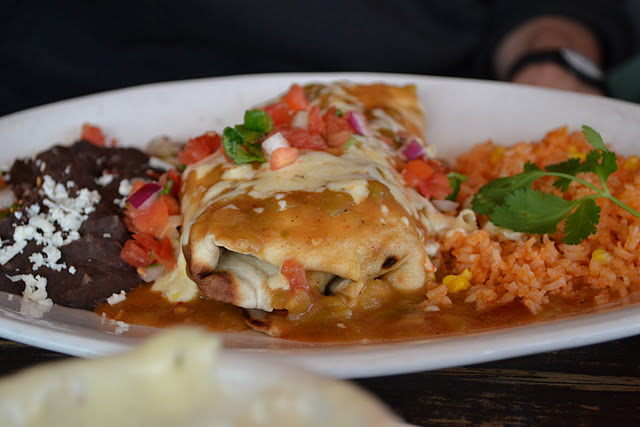 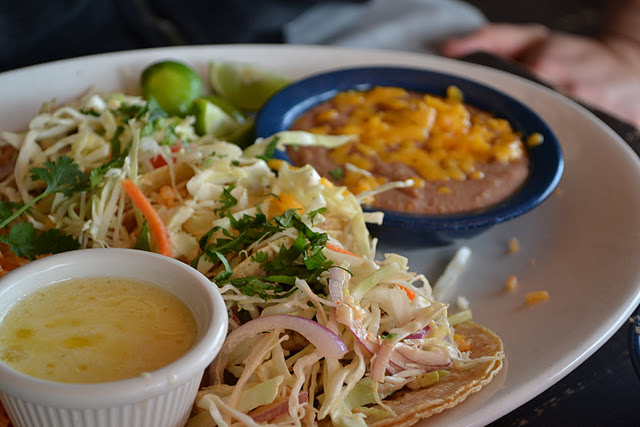 Much can be said about packed restaurant tables, loud music, and fragrant Mexican food. It was a sunny day on Henderson Avenue and perfectly conducive to an afternoon at the ol' Hacienda on Henderson patio. We were escorted to a centralized outdoor booth and greeted with a sprite, hospitable waitress, covering an array of St. Patrick specials. We warmed up with a round of infused Habanero Mango shots, a cool tequila apertif to preface our entrees. The Camaron a la Diabla was a festival of seafood and vegetables. The shrimp was mild and casted well with the crispy red onions, cilantro, and lime overlay. It was incredible. As an aside, it's pretty safe to say I'm a black bean junkie and suffice to say, Hacienda did their homework. Not under-cooked or over-spiced. The beans were a great, regional complement to the shrimp.

Inside Hacienda on Henderson Bar (pictured)

The meat in the Ground Sirloin Burrito was tender and well cooked for maximum taste (medium to medium-rare). The burrito meshed well with the sauce and the rice played as a perfectly sponge for a cilantro, diced tomato, and melted cheese mix.

At Hacienda on Henderson, the ceremony between staple drinks (bebidas) and Mexican dishes is carefully concocted, with one often complementing the other. Try their impressive selection of infused taquila selections. The meats and under-appreciated seafood at Hacienda, which include seared tilapia, arrive hot and seasoned with Mexican flare. It's a place to lay back, have a few drinks, eat some local Mexican fare, and settle into the night. 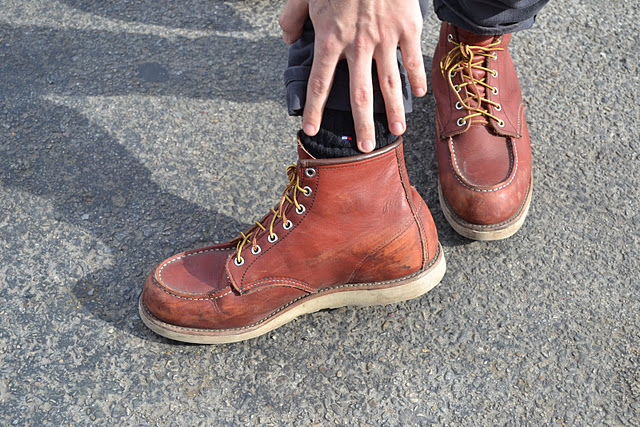 A special thanks to Tom Krell [How To Dress Well], Miles Zuniga of Hacienda on Henderson, Caleb Moriarty of Yours Tru.ly, Prekindle, and 35 Conferette. 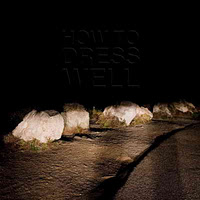 How To Dress Well is: