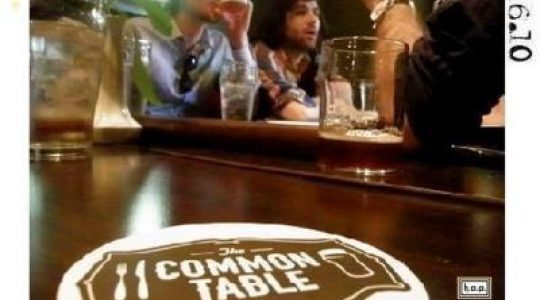 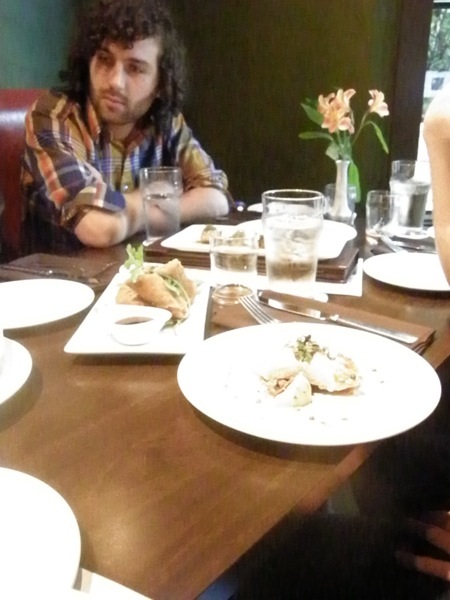 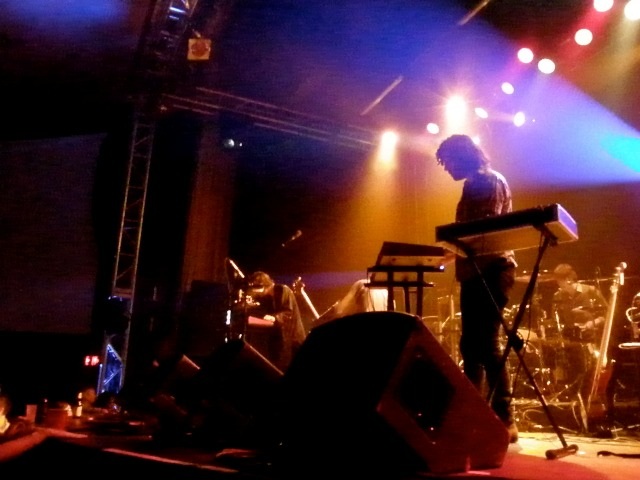 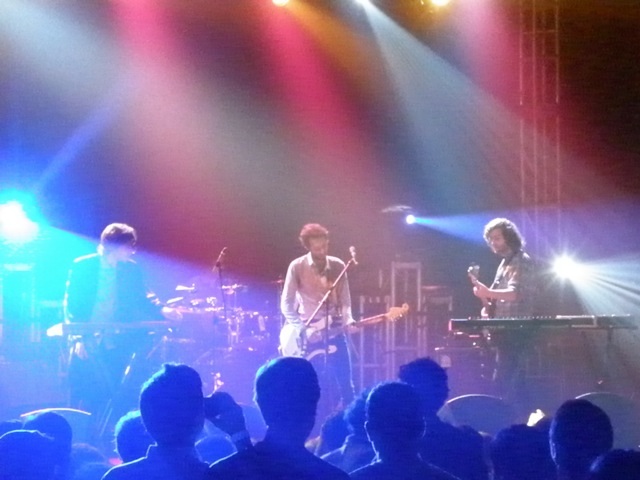 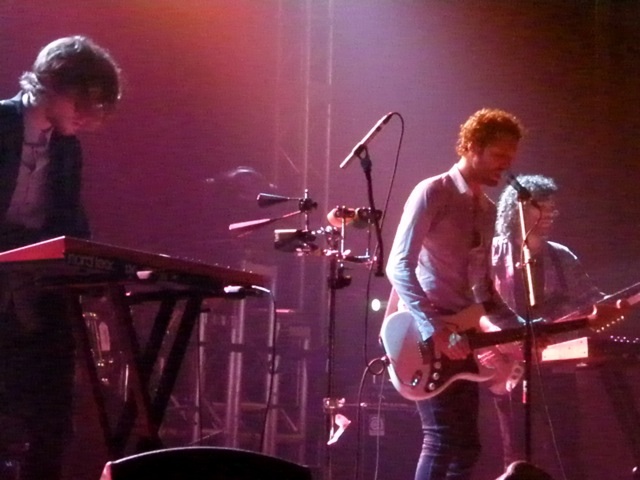 With a much-hyped worldwide tour following the debut of their first full-length album, Illumination (released on August 20th, 2010), Miami Horror is clearly on the rise. We were able to sit down with them over dinner and drinks at The Common Table, a great new restaurant in the Uptown neighborhood of Dallas, Texas. After dinner, it's off to their show at The Granada Theater. Great food, cold drinks, and up-and-coming music? It must be the first installment of Tunes N' Spoons!

So, first, tell us, Ben, Daniel, Josh, Aaron, how did you guys meet?

Daniel: Well we're all from Melbourne (Australia). Ben and I went to high school together and were DJing back then. Josh, our senior guitarist, ran into Ben later on and they made an EP together, and Aaron is friends with Josh. So yeah, that's really how we all met.

Where did the "Miami Horror" title [of your band] originate?

Ben: I made it up. I was putting words together and it was basically to create something original and bold. The two words fit together well.

How is the Melbourne music scene? What type of music is coming out of Melbourne, or, how is the Australian scene as a whole?

Ben: I guess it's not huge which is good, I mean it's not overly competitive, or not full of low-quality type acts. Also, lots of people know each other. The scene is filled with electronic bands that focus on mixed sounds. That's Australia's thing at the moment.

Aaron: It used to be lots of indie bands and like DJing type of stuff. That's always been real popular.

What's the festival scene like? How do they differ from headlining your own shows?

Ben: We played a lot in Australia for the last year which means every fan has seen us once, if not, four times. And so it's a case where, at festivals, there are people that have already seen us. They come and check us out again, but when it's our own show, you tend to find a smaller crowd -- like 1,000 people or something. If I was a fan, I wouldn't want to see a band more than two times in a year, two of them being festivals, the chance to get to come to their own show is pretty cool.

You guys are pioneering the mixing of contemporary electronica rock with late 1980s retro synth-pop. Who were your influences growing up?

Daniel: Supertramp and Pink Floyd were probably the big ones for me, personally.

Aaron: We've all just mixed it up. Now it's more like Daniel was saying with the old school 70s, to trippy stuff, to dance, to disco, a little bit of everything.  Upbeat stuff!

What made Miami Horror decide to transition to a four-piece live act? Was it a difficult process to recreate the music as a live four-piece "band"?

Aaron: The DJ set and band set play differently. With the DJ set later tonight, we'll definitely try and play stuff that's just danceable ... that's the whole point of it, but not too hard, something with melody. Something more ... funky.

What are some artists that y'all are listening to now?

Aaron: There is this Australian band called Tiny Parlor. They're pretty cool. I also listen to Dunyon. They are very similar, but a little older.

Ben: I like listening to a lot of stuff that isn't really "dancey." 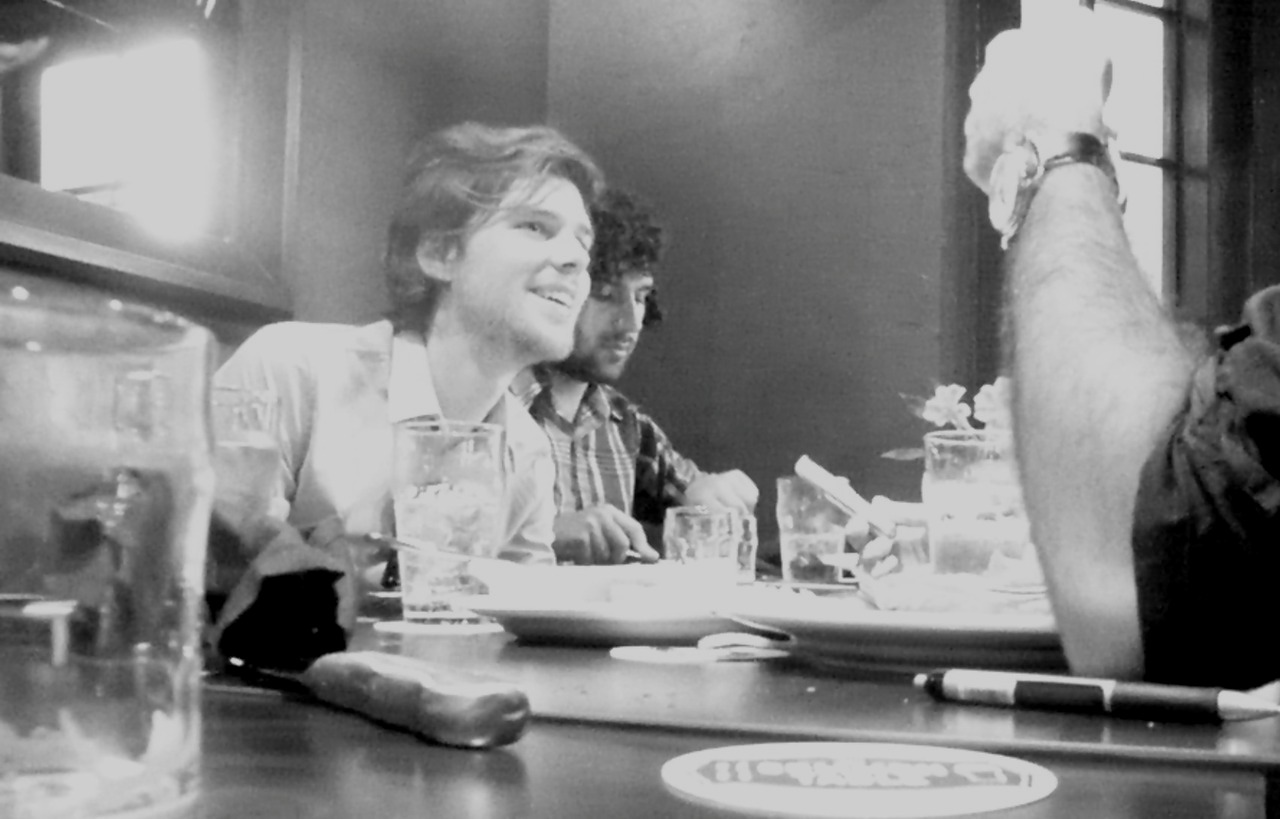 We noticed Neon Indian's Alan Palomo is strongly featured throughout the album. How has his contribution helped? How did you meet him?

Ben: I've been friends with him for a few years and we were always interested in his music and how he produced his EP with Vega [Well Known Pleasures]. He was just starting and flew over to Australia to do some work with the album and then finished the last few tracks while he stayed there. Hopefully we'll work together again.

This is your first tour together. How is the tour going?  Any moments that stood out (good or bad) along the way?

Daniel: Probably the best show we had was in Santiago, Chile. It was incredible. We played in this beautiful dome that probably fit about 1,500 people. The crowd was just going crazy... jumping up on stage.

Aaron: Girls were trying to grab Daniel on stage.

Daniel: It was crazy, man.

Did they have good food?

Aaron: Actually, these guys before we went to the gig, their promoter took us out for dinner and he was like "try these oysters out -- they're so fresh" and I was the only one that didn't try them. The promoter and the rest of the band had them and they all got sick after the show for two days straight except me.

That won't be the case tonight, I assure you. What type of dish do you most frequently eat?  Favorite type of food?

Daniel: I eat lots of fish, vegetables, and salads.

Ben: Asian food for me all the time ... dish wise. It's very common in our area.

Aaron: I'd say fish for me as well.

Aaron: It's always changing, you could say lately you see a lot of pasta dishes.

Do any of you guys cook?

Aaron: Yeah I cook, I used to cook at this place called Pancake Parlour [Smiles.]

Daniel: There was this really nice Thai restaurant I used to go to. It's called Sala Thai on Brunswck Street in Melbourne. It actually just closed down but I used to go there all the time.

Aaron: My favorite bar is Cookie. It's this place in Melbourne on Swanston Street, a main street in the city. Do you know the band Phoenix?  We went to the bar with them too so that was a fun memory.

Ben:  I like Cookie's food better than other spots. It's really consistent, it has many influences in flavor and this sweet chili. They have a few key dishes that everyone likes.

"I'm a huge music fan. There's a lot of young people that come into The Common Table and love the music. There's a couple of places around here that have great music on their jukebox, but in addition to the food, we're trying to create an independent, local music scene in this part of town. I think it's starting to take off. As for now, let's eat.

"We have the Pulled Pork Spring Rolls with yuzu sesame sauce.  It's our best selling small plate appetizer. The Buffalo Meatballs with white wine tomato sauce, roasted peppers, and parmesan, and the Crispy Duck Salad with watercress, radish, sesame seeds, cilantro, bean sprouts, and sesame soy dressing. On the other side of the table, we have The Camburger with French camembert buttery cheese, which goes great on the burger, the Pan Seared Atlantic Salmon with mixed wild mushrooms, artichoke, tomatoes, and fennel & lemon caper sauce, and the Chicken Fried Rib Eye cutlets with home style gravy and roasted garlic cheddar mash. Dig in." 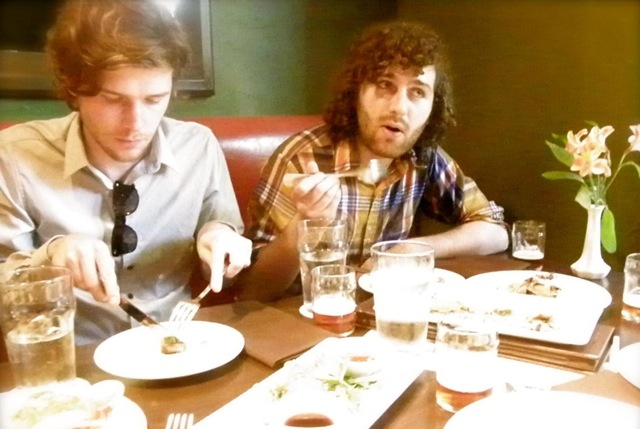 [To Miami Horror] What did you all think of the entree selections?

Ben: The rib eye was really good and the Buffalo Meatballs, a traditional choice with lots of flavor. I really liked the Pulled Pork Spring Rolls too.

Aaron: The Chicken Fried Rib Eye was the best. The home style gravy, man that was great.

Daniel: It was all really really nice. I think the Pan Seared Atlantic Salmon with the mushrooms was my favorite. Amazing! 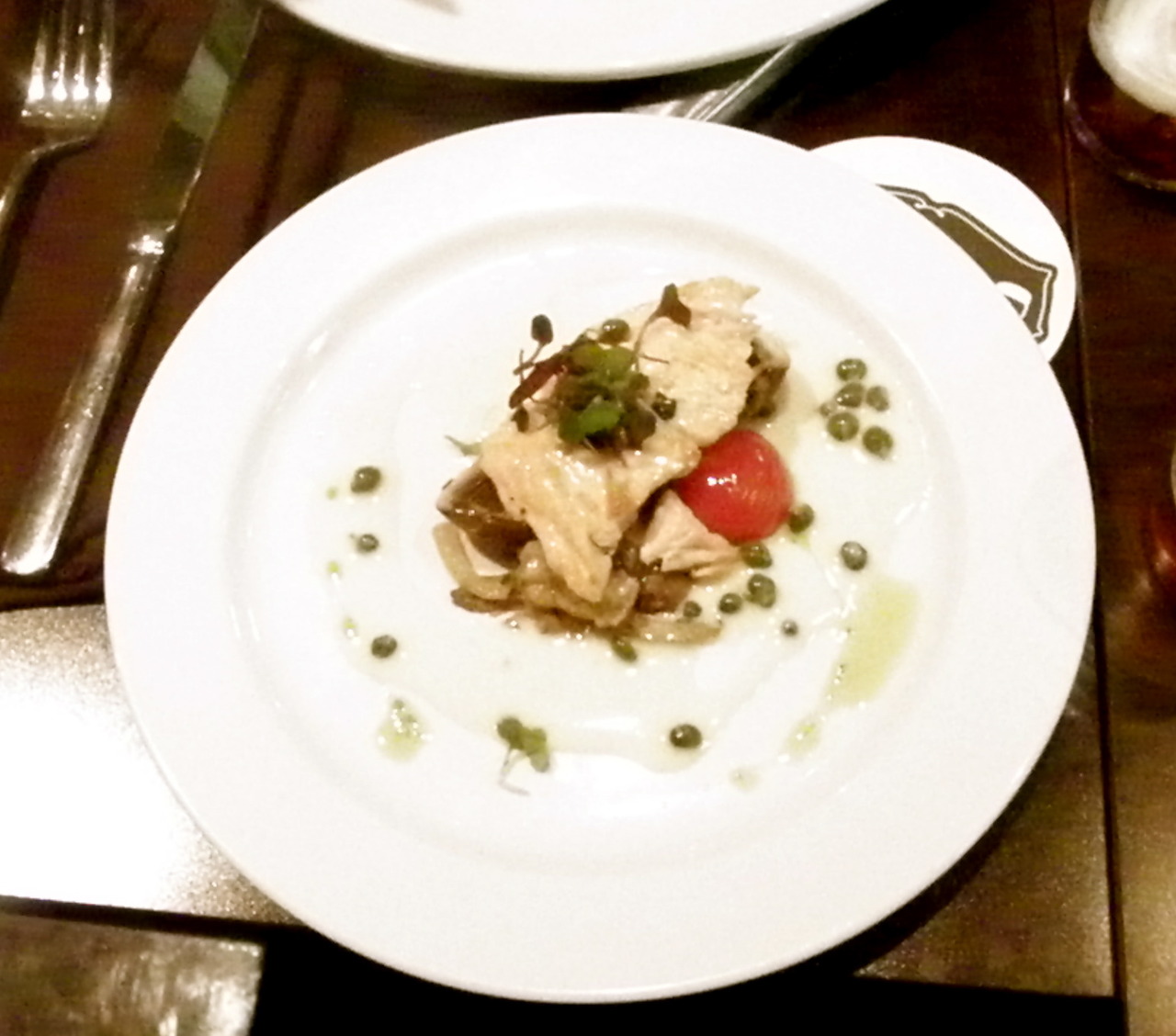 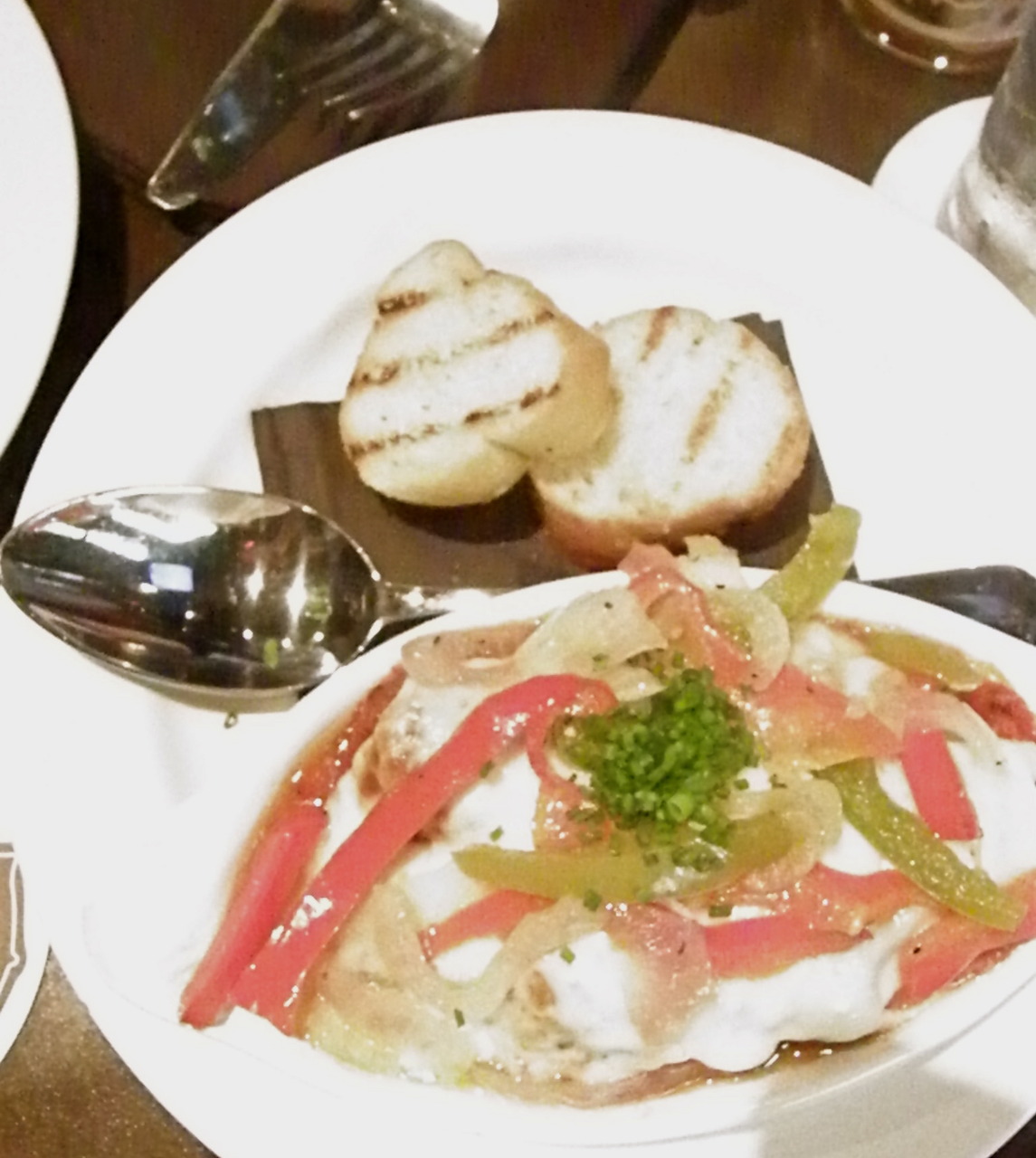 Photo of The Buffalo Meatballs

The Crispy Duck Salad. Chef Ackland perfectly managed the balance between crispiness, juiciness, and meat. The duck really blended well with the sesame soy dressing, almost to the point where it was difficult to share the entree. Had ...to ...move ...on. The Camburger is thick, rich, and voluptuously tender. It's simple, yes, but the camembert is truly an experience. Have the Buffalo Meatballs, chew slowly. No matter how many times we frequent The Common Table, we don't think we'll get tired of this appetizer. The spices, the parmesan, the tomatoes -- it was a perfect cocktail of multi-layered tastes. Finally, in addition to the eats, allow yourself to peruse through the beer and wine selections. Corey Pond and Beer Cicerone Jeff Fryman, have an eclectic collection to recommend for each entree.  Your palate is meticulously worked from start to finish.

Photo of The Crispy Duck Salad

A special thanks to Miami Horror, Owner Corey Pond, Jeff Fryman, and Executive Chef Ben Ackland from The Common Table, Jerry Soer and Rachel John from Staple Management, Dave Fitzpatrick, and Gavin Mulloy from The Granada Theater. Thank you for making this first Tunes N' Spoons such a success. 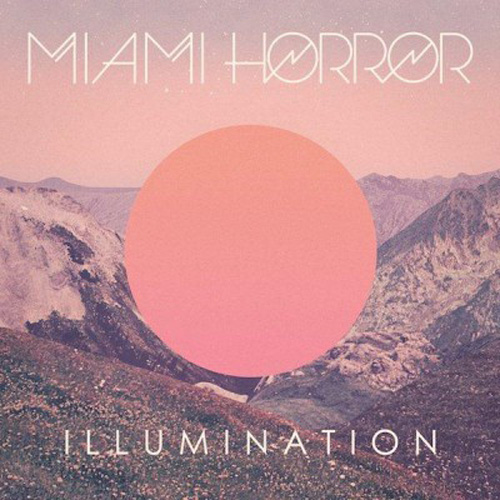