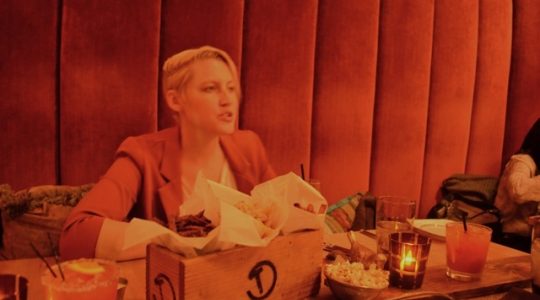 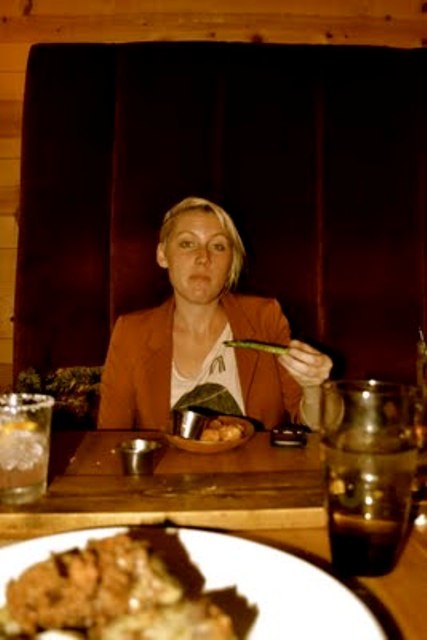 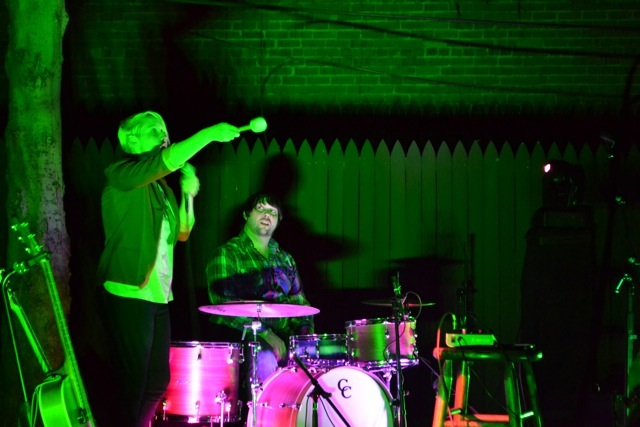 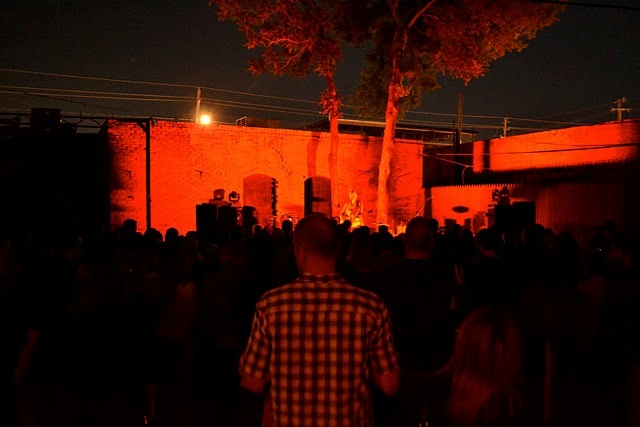 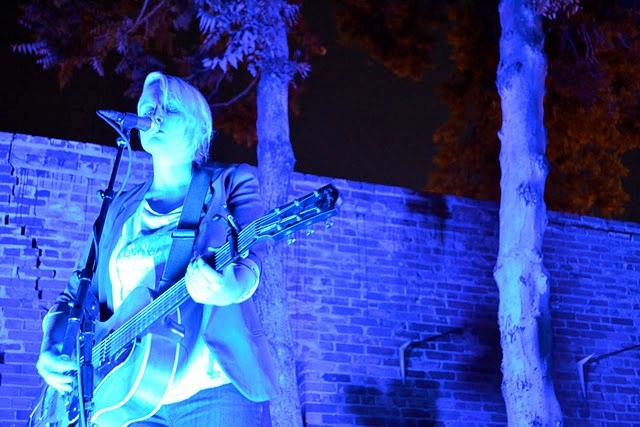 If you haven't heard of Sarah Jaffe, you haven't been paying attention. And that's a damn shame. The Dallas-raised, Denton-living singer-songwriter has found enormous success since bursting onto the North Texas music scene in 2006. Her music has won numerous awards from the "Dallas Observer" and she has toured all over the world with Midlake, the Old 97's, Norah Jones, and Centro-matic. Her latest EP, The "Way Sound Leaves A Room" (Kirtland Records, available on iTunes), was released last month. She joined us for a wide-ranging conversation involving her music, the (non-)taste of Subway salads, and the comparatively far more delicious food from Tillman's Roadhouse (in Oak Cliff's Bishop Arts District, 324 W. 7th Street, Dallas, Texas 75208).

In your earlier years, around the age of 17, I read somewhere you were inspired by your pink room. It helped facilitate writing your earlier music. Can you expound on that? What inspires you today?

Yeah I think lately it's been much different than when I was younger and in my parents house. I write on the road now. I like to do the driving... I tend to have control issues [laughs]. But yeah, I write in my head rather than on paper. I'm definitely not the type of person who goes back to the hotel and back to the laptop to crank out songs. The creative juices just start to flow on the road. When I come home, its been quite the opposite lately. Now, it's about running errands, doing laundry but once I get on the road, the lights turn on. It's been interesting.

Has it been difficult to acclimate to the increasing attention you're receiving? What kind of transition has it been for you? You're getting all these interviews all at once. Has it sunk in?

I would say I'm one of those people who have to have people around me to tell me to enjoy the moment. I always tend to focus on what is going to happen, the future, if things go wrong, etc. But yeah, it kind've blows my mind as I look back at certain things. I think that's how I get shocked. It's when I look back on certain events. It doesn't seem to sink in at the moment when it's all happening.

I recall you lived in LA for a while.

I just remember getting my ass kicked pretty quickly. If you're not well adjusted, it's not going to be easy. It can be amazing if your grounded and have a successful career or aspiring career ahead of you but it can also be a pretty terrible place if you can't find a job, selling tickets to get a gig. It was hard but I mean I was 18. Luckily, I was fortunate to have friends to stay with. It would have been pretty expensive otherwise. 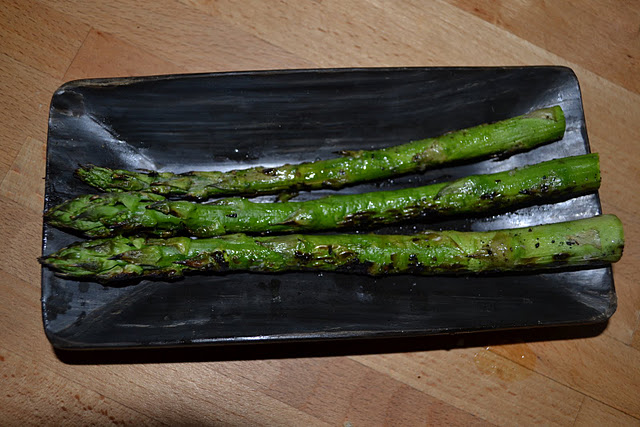 photo of the sea-salted asparagus

How was it like touring with Norah Jones and Midlake?

Melanie, my best friend, is also friends with Norah. Melanie was like, "uhm hey so I talked to Norah and she wants to take you on the road." I was like "oh cool, ok yeah sure" not thinking she was serious. Right after I got off the phone with her, Norah texted me, (which is how my iPhone bill became $2000) and asked if I would go with her on a short two-week run in December. My answer was..."uhh yes. Of course". Norah is amazing and watching her and watching her handle her level of success - seriously blew my mind. She's incredible.

Midlake and I are good friends that have supported me from the very beginning. They asked me to tour across Europe with them which was absolutely amazing. It was one of the most enjoyable trips I've ever had. The lifestyle, the road, the bus, with 13 boys [laughs]. We would wake up and we'd be in Norway. It was just crazy. 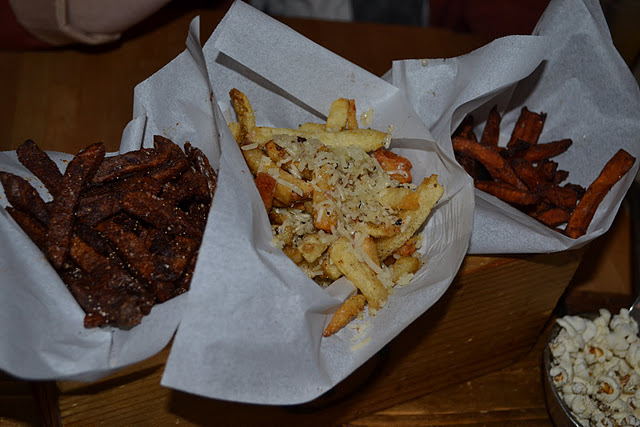 photo of the Trio of Fries

You have also worked with Robert Gomez.

Yes, I met Robert when I moved to Denton almost four years ago. We just met and connected... playing every day. We'd play music for hours in this awesome studio he made at his house. I think he's just an unbelievable talent. I'm currently traveling with Jeremy Buller and Andy Young this leg so it'll be fun. Real good. 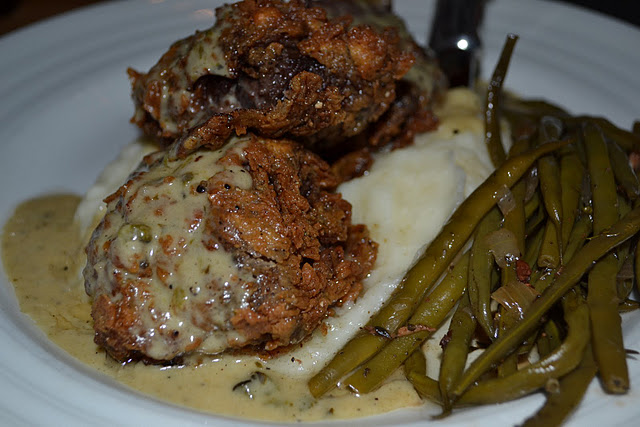 photo of the Chicken Fried Steak

Your now touring around the nation. What do you eat along the way?

I really do like a lot of fried food and fast food. Unfortunately, I can't indulge in much of it on the road. I just can't do it, I'll get sick, sleepy, and/or have a heart attack. So I just resort to eating subway salads.

Exactly! Nothing Salad. Nothing is great! But yeah, when I can, I'll always go for the hummus or a lot of fresh fruit. 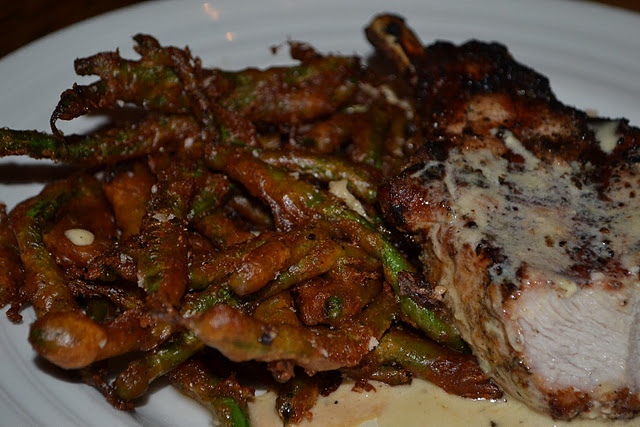 Do you remember a particular spot or restaurant/dive along the way that was pretty decent?

I actually have a couple of places, one I cannot remember the name but I was on a radio promotional tour on the radio branch of Kirkland Records and we were doing the Northeast coast which was amazing. With these radio trips you go to these stations at noon then you get the rest of the day off! We went to Cape Cod, Martha's Vineyard, and just walked around. We stopped off right before we got into Vermont, which ironically is one of my favorite states. Just gorgeous. We visited Robert Frost's gravesite and balled it was so gorgeous. I want to say we were in Albany? It was this little family owned deli and my favorite thing ever is deli food. Chicken Salad sandwiches. They had THE best hummus chicken salad sandwich on sourdough! 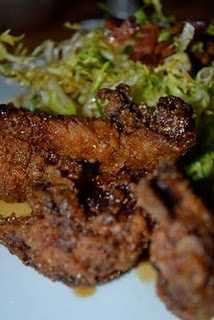 It just kind of stayed with you.

Wow. Yes, it was so incredible!

It reminds me. At Robert's house, he did this project once where everytime a friend would come over to the house, he would take a Polaroid picture of them and ask they write what their last meal would be on the back. It was really cool. Mine was chicken salad sandwich with potato salad, Mexican coke, and blueberry cobbler. 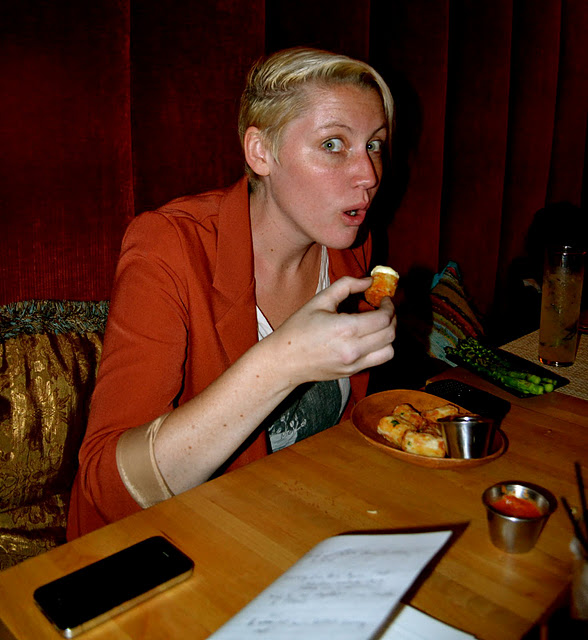 Tillman's Roadhouse offers a varied menu of what is described as sophisticated cowboy cooking.  For starters, the Trio of Fries does not disappoint.  This appetizer included Parmesan black pepper Kennebec, chili dusted purple Peruvian, and smoked salt sweet potato fries served with Tillman's homemade ketchup and their very own horseradish pickle mayo.  The main course offered Maple Brined Porterhouse Pork Chop to write home about, a bone-in strip that stands toe to toe with the offerings from any steak house, and a flavorful version of chicken fried steak that deserves its own holiday.  While the entrees left us as happy as could be, the sides were not to be ignored.  In particular we were quite taken by the truffled tator tots and the mac and cheese featuring bacon and scallions.

Food is king at Tillman's, but there is no question that the specialty drinks make for a close second. Lucy Brennan, Tillman's resident mixologist works magic behind the bar.  While it's hard to narrow it down, two drinks stole the show.  87 Ways mixes Tanqueray Tex Gin, fresh lemon/lime juice, simple syrup, apricot puree, and peach bitters and the result is nothing short of heavenly.  For the whiskey drinkers out there, they offer the Low Country, a concoction featuring Buffalo Trace Bourbon, cherry, lemon wedge, a sugar cube, simple syrup and passion fruit, topped with club soda. We like this place. We like this place a lot.

It already had the vibe: that tall, wooden and damask-lined wall spiced with the old gentrified Bishop Arts 7th Street, and framed vintage mosaics to top off the regional flare. It already had a deep, cool scene. But the food? The food substantiates Tillman's. It's here to stay.

Sarah and Lucy make Tillman's the destination in Dallas whether it is food or beverage that you deside.

A special thanks to Sarah Jaffe, Josh Madans of Todd Events, and Sara Tillman of Tillman's Roadhouse 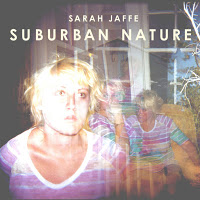