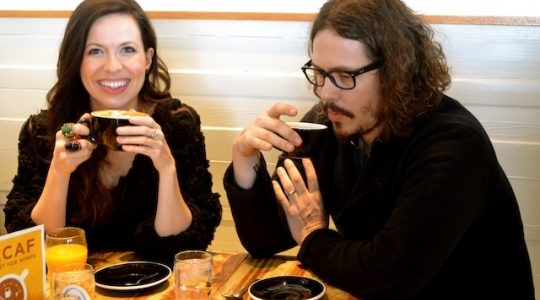 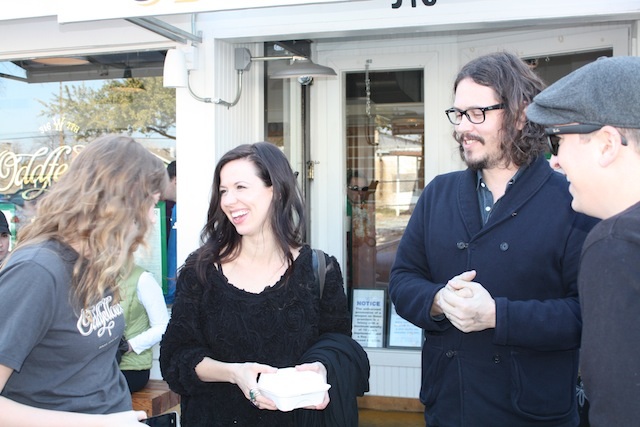 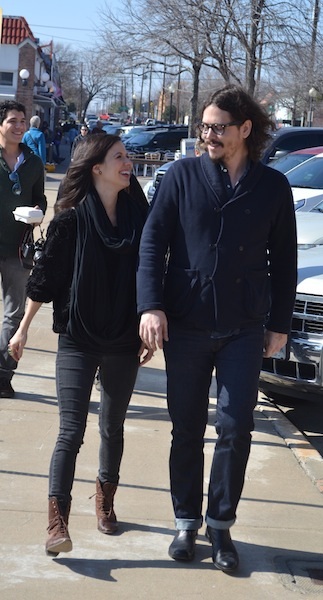 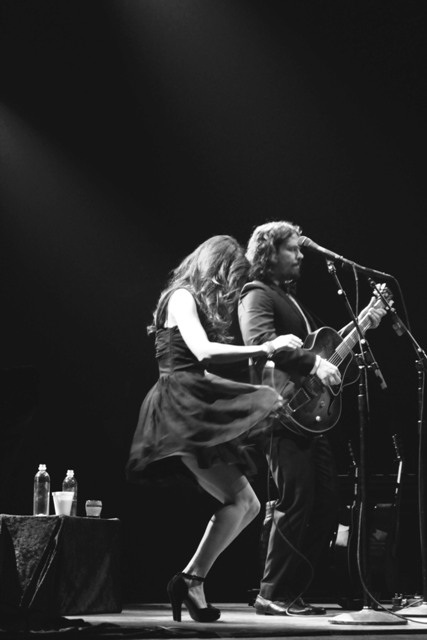 When they're not selling out performances fresh off the heels of their full-length debut LP, "Barton Hollow," Joy Williams and John Paul White of The Civil Wars are busy breaking hearts. From scoring music for a Sundance film, "The Hunger Games," to opening for Adele, it's a very big year for the Nashville duo. As they rolled through Dallas, we met up with them at Oddfellows, a Bishop Arts destination that proved to be perfect for conversation, coffee, and casual eats.

[This interview was conducted before the Grammys. In case you missed it, the Civil Wars won Grammys for Best Folk Album and Best Country Duo/Group Performance]

First of all, congratulations on the Grammy nominations. How is the "Barton Hollow" tour going?

John Paul White (JP): Thanks. It's been great.We've been steadily touring for a year now, about a year ago from today actually. We've taken a couple of weeks off here or there, and we took a few for Christmas. So we just got back on the road again, and we've done about 8 or 9 dates so far. It's been good, but the weather has been ... hilarious. It's like 4 degrees one day and 70 degrees the next.

JP: Yeah, our sinuses are thrilled! But yeah, we're on our third time through some of these places.

You two met in Nashville. John Paul, you have Alabama roots? There has to be great local fare there. We're driving through there next month. Where should we stop?

JP: There are 2 or 3 really good places. Every town in the South has their BBQ spot. We (John Paul is from Florence, AL / Muscle Shoals, AL - a small town in the northwestern corner of the state) have a place called Bunyan's Barbecue, and the BBQ is well above average, but the slaw is why you go. Mustard slaw, hot slaw...

Mustard-based [slaw] has such a kick.

JP: Yes, and a lot of vinegar! They also make these hot dogs, they're just super simple hot dogs with that slaw. We call them "crack dogs".

Just can't have one. 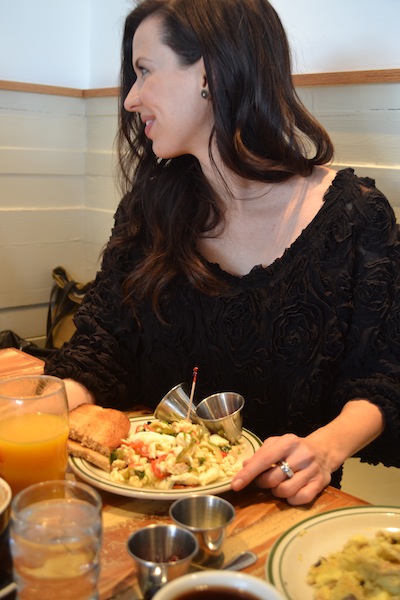 So Florence is the home of Billy Reid Clothing Co. too, correct? He loves you guys.

JW: And we love him back!

JP: Yeah, everything you see [points towards his outfit] is all Billy's stuff.

So, basically, he suits you up for your performances?

JP: Yeah, it was just total luck. I don't know how this worked out. His wife is from the Shoals in Alabama [Muscle Shoals]. Billy is a Louisiana guy, but he would come to the Shoals for family reunions and holiday stuff and just fell in love and decided it's where he wants to be. He lives like a street away from me and it's just total karma, I guess, you know? We were into what he did, he was into what we did, and it was a perfect partnership. I can't imagine a more perfect situation. He's a supporter of local music, and his style and what he does couldn't match up better to what we do.

JP: Classic. Any situation you can wear it, it's the best. And he's a good person.

The Grammys are coming up. Excited? Nervous?

JW: We're in the throes right now of figuring out what to wear, although John Paul is pretty dead set.

JP: Yeah, mine is taken care of.

JW: While I've been scouring!

JP: Billy contacted me when we got the nomination, like within 30 minutes he texted me and just said, "tux". 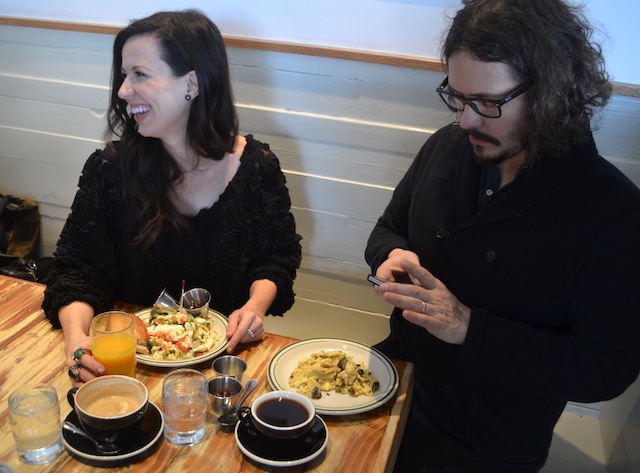 You're set up. Pretty awesome.

JW: And when Billy makes a tux, he makes a beautiful tux.

JP: But we'll be racing time. We'll still be on the road when it's done,  so they'll have to ship it to me and hopefully it'll be good to go.

JW: AND he's been gluten-free all this run.

Yeah, we were about to ask how it works with road food. I'm sure it would get to my waist.

JP: We're getting better at navigating bad food on the road. We've gotten to the place to where people will listen to what we say or request. That hasn't always been the case. Now we try to keep good, nutritious snack foods around.

JW: I think it's about learning that there are so many aspects on the road that can either help or hinder your ability to keep going since it's such a chaotic schedule. Sleep is sporadic. Time to rest is sporadic. Days off are really sporadic. So having to capitalize on moments that will help you is important, and we've learned to exercise, eating well, and sleeping whenever we can get it.

Days blend together, I mean, essentially, you have to find time to sleep, day or night, right?

JP: We had to learn that over the course of this past year. We toured more and worked harder than ever before, and we thought we were on it but ... I'm definitely the most reluctant to when it comes to eating correctly because of where I grew up. I love dirty food, I love good food, but I started figuring out that there was a definite correlation between sleeping well, eating well, staying healthy and being able to sing every night. That's really the most important thing, that I function. You shut down, you cause a big shift because so many people depend on it.

JW: We may not take ourselves seriously, but we take what we do seriously.

Exactly, how to make the perfect balance. How do you deal with not feeling well?

JW: Last year alone we had 150 shows and about 150 promos that involved performances. It takes a toll, and like John Paul said, we learned at various points we couldn't sustain that consistently without periodically encountering some flu, cold, or sniffle. And as long as we are able to sing, regardless of how we feel we go on stage. It's the times that, you know, we get laryngitis that you catch on a long plane ride. You can't worry about it, can't be fretful about it. You go as long as you can. We love singing, so it's not a burden to us every night that we get to play a show. We've been dreaming about this for years, before either of us met each other. You make music that people want to see, that they to be a part of, and that momentum further encourages us to continue on. We care about all the people who came to see us, who bought tickets. But we also have to take care of ourselves 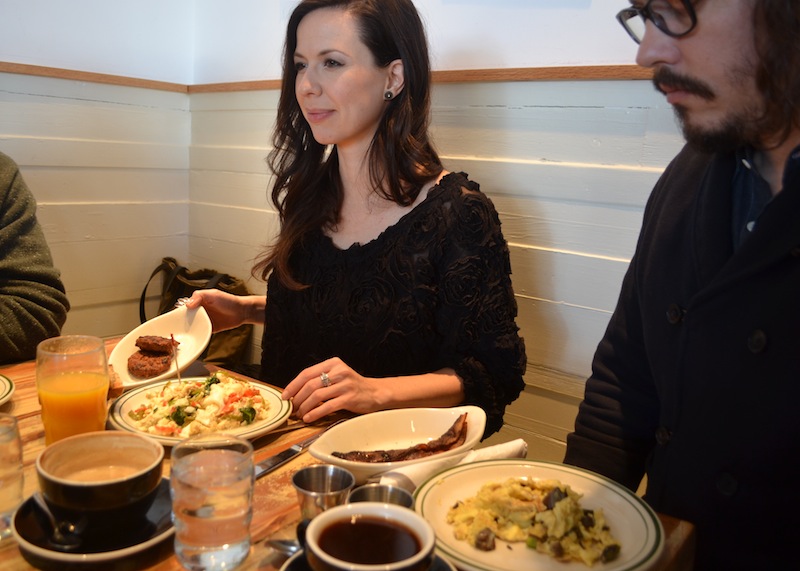 And, wasn't it Adele, who got laryngitis?

JP: Yeah, and that's on such a greater scale because she has such a large team, band and crew, so when she shuts down, it causes a big ripple effect. The thing with us, as with her, is that everything is about the voices, the harmony and everything. Nobody can really take the night off, we're not a rock band where we can turn the vocals down a bit, sit in the mix and make it through. It's Joy and I on the guitar. There's no hiding.

JW: Which is what we love.

JP: And that's what we want to do.

Turning to the album ... it's clear you wanted to have just your voices come though. Both of you were so clear. Powerful

JP: A lot of that credit needs to go to Charlie Peacock, who produced our record, and Richie Biggs, who engineered it. They couldn't have done a better job documenting what we do. The way we recorded it was the same way we play live: she and I on the guitar or piano. We never had a moment of "let's use auto-tune," we never really talked about it but we knew.  And as long as we're interested, we think other people will too. As long as we're not bored, hopefully that translates.

JP: Man, it's great and totally what we needed. This place looks pretty cool, too. Next time we come back, it's Oddfellows. 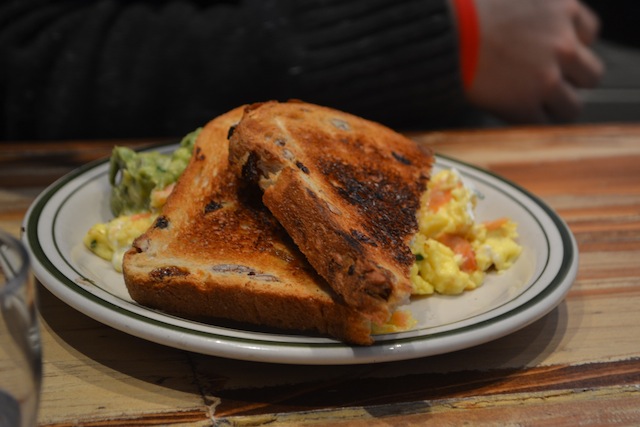 JW: So delicious. You can tell they put a lot of time into the coffee, too.

We love Oddfellows. Outside of the pretty solid dishes, it has a really good vibe. 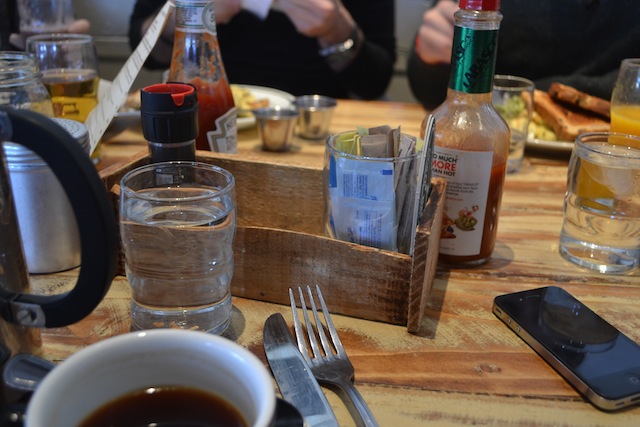 Right down the road. [dips hot sauce] Hot sauce is a must. If you had the choice, what do you use? Louisiana?

JP: Cholula is my favorite.

JW: Tapatia is really good too.

Cholula is where it's at. The taste has a lot more spice and onion that come through.

JP: Yeah,it really doesn't have the kick to it as others do, but the flavor is so good. It's like a science experiment at home, to see if there's anything that doesn't go good with it.

JW: So, I have to ask. Have you guys ever had an interview, and then you see something stuck in the person's teeth? How do you deal with that? 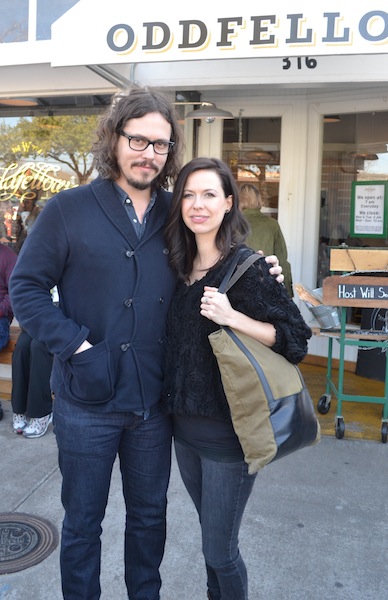 It's usually us who are worried about having stuff in our teeth.

JP: And now everyone's checking their own teeth right now...

JW: But how do you deal with it?

Well, we've never had to deal with it ... yet. We'll be sure to prepare for next time, you know, mirror in the pocket. Thanks for hanging with us at Oddfellows.

JW: Thank you so much!

JP: Yeah, I wish every interview was like this.

There are many reasons to frequent the Bishop Arts District these days, from boutique window shopping, to Dude! Sweet Chocolate, to just ... people gazing. It's one of the few places in Dallas where the bike-to-car ratio could compete with, let's say, Portlandia's.

At his restaurant/coffee house, Oddfellows, Matt Spiller knows how to attract a cool scene. It's a breath of fresh air. Distressed wood, screen-prints, fragrant espressos, outdoor piano tunes. It's all great. 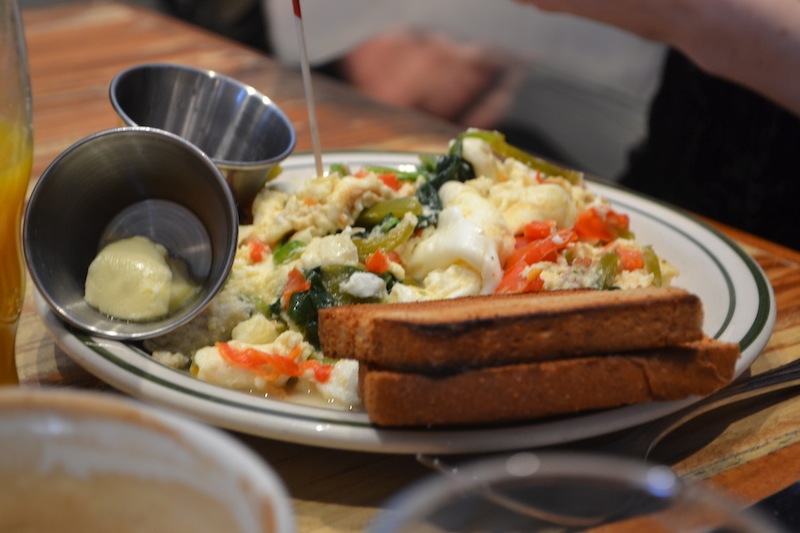 Eno's Pizza Tavern, his sister concept, is a stone's throw away. A short drive away is Union Bear, his new flagship nano-brewery in West Village.

Oddfellows serves unpretentious Traditional American dishes in a folksy, friendly setting. And it feels that way from the moment you walk by their outdoor/indoor coffee bar. On this particular Sunday, The Salmon Scramble caught our eye: cured salmon, green onion, goat cheese, and avocado. Equally delicious was the egg-salmon combination, which perfectly incorporated the crunch of the onion and the richness of the goat cheese. The French Press apertif was bold and oily, two requirements for a worthwhile morning coffee.

On any given Sunday, the dozen other brunch favorites ($5 to $10) are likely to cover Mexican-inspired selections (migas and huevos rancheros), Americana (waffles and yogurt) and yes, the unconventional. Is Duck Hash (pulled duck with breakfast potatoes and jalapenos) unique enough for you? Dinner appetizers include an Elotes cup with crisp grilled corn, onions, sour cream, and honey butter. And among the entrees are Genesis Farms beer-braised short-rib served with roasted tomatoes + squash summer salad and a local Wagyu cheeseburger on a brioche bun.

Suffice to say Spiller is on the cutting edge of the casual-to-moderate food movement. He creates an experience beyond just food. From the Sunday morning patio scene to a guys' night out to handling an intimate date. He's got you covered.

A special thanks to The Civil Wars, The Civil Wars Management, Stacey Rives of Spiller's Group, Oddfellows, House of Blues Dallas, and Christine Cote Photography

The Civil Wars are: